Blog - Latest News
You are here: Home / Around Amma 2000 / If Amma ruled the world, She would be a sweeper, cleaning everyone’s...

The day after the summit, Amma’s press conference provided one of the most magical moments of the Summit. One of the journalists asked Amma what She would do if She ruled the world. Amma laughed and responded, “I would be the sweeper.” The journalist looked at Her quizzically, and Amma explained with a laugh, “I would sweep everyone’s mind clean.”

Amma went from the press conference in to a sound studio where PBS (Public Broadcasting System) filmed an interview for an upcoming documentary. Her eyes sparkled and Her smile melted the interviewers.

Amma indicated that there needs to be a reawakening of Motherhood in society, that children are more naturally attached to the Mother than the Father, and the responsibility for the moulding of a future generation lies with the Mother. She went on to say that this is both an opportunity and a challenge – women must learn to develop their nurturing self and their patience. Women must also spend more time with their children, for peace in the future is predicated on proper upbringing of children today.

Amma also provided an insight into Her own childhood experiences that were instrumental in awakening the God consciousness within Her, even at a very young age. Despite the fact that She grew up in a very small village that had no spiritual inclinations, Her spiritual awakening came from observing the abject plight of the suffering poor. She told how She went to collect the tapioca husks for the cows and as She went from house to house, She observed that often people had nothing to eat and were starving because their food came from the ocean and if there was no catch that day, they didn’t eat that day. She also observed the lack of real love between the family members. This caused Amma to reflect on the meaning of real love and what the origin of suffering was. This contemplation combined with compassionate efforts to help the villagers awakened the consciousness of the Divine in Amma.

Amma was asked by Her entourage about the advisability of waiting to sign the release for the PBS interview until knowing how the interview would be used, but when they asked Amma to let them read the release first, She responded, “It’s OK, it’s OK.” A person present said that she felt tears well up in her eyes as she worried that Amma was “giving Herself away,” but Amma put Her arms around her outside in the hall afterwards, and said, “Don’t worry daughter. It’s an offering.”

The BBC (British Broadasting Company) journalist also wanted time with Amma, so she came to the suite and taped Amma’s responses to a variety of questions as Swamiji translated. 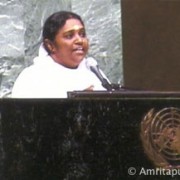 I never felt any difference. Just like I am talking to you, I was talking to them

The Real Change Must Happen Within

For the first time Malayalam in UN General Assembly Hall

Amma returning after the UN summit
Scroll to top