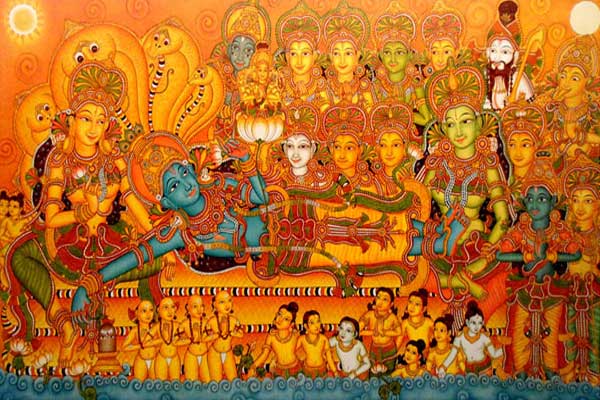 The word “Trivandrum” is meaningless. It is one of the many nonsensical names to befall Indian cities during the British colonization. The Kerala capital’s real name is Tiruvanantapuram: The Revered Endless City1. The city is referred to as “endless” not because it is without geographical borders, but in reference to Ananta Shesha [the Eternal Shesha2] the multi-headed serpent upon which Lord Vishnu is said to eternally recline.3

The main temple of Tiruvanantapuram is the Padmanabha4 Swami Temple, which is located in an area known as Anantankad: “The Endless Forest.” The story behind the origin of this temple and Tiruvanantapuram’s eternal connection with Lord Vishnu is revealed through several legends. In fact, the city is mentioned in five Maha-Puranas—Padma, Skanda, Vayu, Varaha and Brahmanda. In Brahmanda Purana, an entire chapter is dedicated to “Anantapura Mahatmyam” [the Glory of Ananta Puri]. In the Srimad Bhagavatam, Balarama, Krishna’s brother, is said to have visited the Padmanabha Swami Temple. The temple is considered to be one of the 108 Divya Ksetrams of Lord Vishnu. It is also mentioned in the Mahabharata.

According to the puranas, the temple was set up by a Tulu Brahmin ascetic named Divakara Muni on the 950th day of the Kali Yuga5. Divakara Muni, a great devotee of Lord Vishnu, was performing tapas [austerities] in a forest. One day, the Lord appeared before him in the form of a beautiful child of unearthly charms. The muni immediately fell in love with the child. He took the boy in his arms and caressed him like a mother. The child was very affectionate to the muni as well. He requested the boy to stay with him. The child agreed with one condition: the muni should never get upset with him. The muni agreed, and for years he raised the boy with the fondness of a mother, all the time tolerating the child’s mischief.

Then, one day when Divakara Muni was meditating before a salagrama6, the child took the sacred object, put it into his mouth and started blabbering away. Seeing the child desecrating the salagrama, the muni forgot his promise and mildly chastised the child. Despite the softness of the scolding, the child immediately ran away and disappeared, saying, “You broke the promise. So I cannot remain with you. If you want to see me, you come to Anantankad.”

The sage was inconsolable. He followed after the child for several days without stopping for food or sleep. Finally, when he reached a wooded area near the seacoast, he saw the child vanishing into a hug ilappa tree [bassia longifolia]. He ran to grab the child, but the child went into the tree, and then the tree immediately fell to the ground, assuming the shape of reclining Lord Vishnu. The Purana says that Lord Vishnu’s form was nearly 13 kilometres long, having his head at Tiruvallam [about 5 km from the present temple] and its feet at Trippapur [8 km in the opposite direction]. He prayed to the Lord to reduce his size so that it would be possible to see him all at once, so that he may worship him. Accordingly, Lord Vishnu shrank in size and ordained that pujas to him should be conducted by Tulu Brahmins from the same part of the country from where Divakara Muni hailed. [To this day, half of the temple’s pujaris continue to be drawn from the Tulu country in Karnataka.]

There is another version of this story. In it, Vilvamangala Swami, a devotee of Lord Krishna, was absorbed in meditation when a small boy came and scattered his objects of worship. Before he could scold the boy, the boy disappeared. Swallowing his anger, the swami returned to his meditation. But once again he was jarred from his concentration by the sound of his puja articles being scattered. This time, without even opening his eyes, he slapped the child. Immediately the child responded, “I will not see you hereafter. If you want you can see me only in the forest of Ananta.” The swami then realized that the boy was none other than Sri Krishna.

Like Divakara Muni, Vilvamangala Swami was inconsolable and searched day and night for the child. During his search, he overheard an angry mother telling her son that she would “throw him into the ‘Anantankad’ if he continued to be naughty.” The swami immediately asked the mother where this Anantankad was. She directed him, and he ran to the spot. When the swami neared the location of the present Padmanabha Swami Temple, he heard a tree crashing to the ground. On reaching the spot, he found Lord Vishnu lying on Ananta Shesha. According to the story, he also requested the Lord to reduce himself to a worshipable size.

It is interesting to note that the idol in the Padmanabha Swami Temple is so large that in order to see all of it, one must look at it through three doors. It is said that the original idol was the very same wood from the fallen tree. This was worshipped for thousands of years until it the temple, and idol, were renovated in 1729 ACE.

The final story of the temple’s origin says that it area was an ancient forest. In that forest, a pulaya7 woman harvesting crops suddenly heard the crying of a baby. She searched for the source of the sound, and soon found a child with a divine appearance. She considered the child so holy, that she decided to bathe before even touching it. She then began to suckle it as if it were her own. She then left it under the shade of a green tree for some time in order to finish her day’s work. When she came back, she could not believe her eyes—a massive five-headed serpent was sheltering the baby with its five enflamed hoods. The woman related the tale to others, and soon it reached the ears of the Raja of Travancore, who ordered a temple be built on the spot.

Amma herself has visited the Padmanabha Swami Temple in the early 1980s, and in February 2007, she held a darshan program in Sankha Mukham, the strip of beach near the temple where the Padmanabha Swami idol is taken each year for ritual bathing as part of a festival. During that program, Amma commented, “Talking about Padmanabhan is like talking about sugar. It is sweet all around. He is lying down not to sleep, but to awaken you.”

2 The Sanskrit word “shesha” literally means “that which remains.” The idea is that Ananta Shesha continues to exist even at the end of a cycle of creation. He is considered as an extension of Lord Vishnu himself.

3 The image of Lord Vishnu reclining on Ananta Shesha is symbolic of yoga nidra, awareness even during the period of pralaya [cosmic dissolution], after a cycle of creation has come to an end and before another has begun.

4 Padma-nambha means “lotus-naveled one.” Lord Vishnu is called this, as he is often depicted with a lotus flower growing out of his belly button. In Vaishnavite tales—wherein Vishnu is seen as the Supreme God and all other gods as his subsidiaries—Lord Vishnu is not only the Preserver, but also the Creator and Destructor. As such, Lord Brahma, who is typically considered the Creator, is presented as coming out of his navel on top of a lotus flower.

5 According to astrological references based on star positions, many authorities believe Kali Yuga to have begun in 3102 BCE. Therefore, the temple would have been begun in 3099 BCE.

6 Salagrama are black stones found in the Gandaki River in which fossil ammonites are embedded, leaving markings like a discus. They are worshipped as abstract representations of Lord Vishnu.