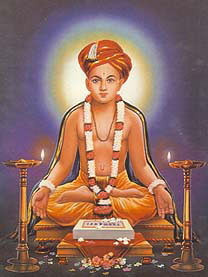 Alandi, a town 25 kilometres from Pune, in the Pune District of Maharashtra, is a revered pilgrimage site for a number of reasons, but foremost is the fact of it being the home of the 13th-century Maharashtran saint, Sant Jnaneshwar (Jnanadev).

In fact, Jnanadev spent most of his short life (1275-1296 C.E.) in and around Alandi, finally taking maha-samadhi there. Jnanadev is mostly known for his poetry, a commentary on the Bhagavad-Gita known as the Jnaneshwari and a poetical-philosophical work known as Amritanubhav.

In his short biography on Sant Jnaneshwar, Swami Sivananda, says that the spiritual master was born with full knowledge of the ultimate reality. “Jnanadev lived for a few years, but he did wonders,” Sivananda writes. “He was a genius, a yogi of deep spiritual experiences and a sage of supreme order. He boldly criticized his predecessors. He was a great social and religious reformer. He laid the foundation of the great bhakti movement in Maharashtra. He was a fine poet to boot.”

Jnanadev was one of three brothers and a sister born under strange circumstances to a sannyasin named Vittalpanth and his wife, Rukmabai. Vittalpanth was initiated into sannyasa by a guru named Swami Ramananda without disclosing to the master that he was married. When, through a twist of fate, Ramananda discovered that not only Vittalpanth had been married but that also his former wife was heartbroken over his renunciation, he ordered Vittalpanth to return to householder life. After this, the four children were born to the couple, all of whom came to be considered as mahatmas. As it was a violation of sannyasin dharma to live the life of a householder, Vittalpanth and his family were exiled by the Brahmins of Alandi and treated as pariahs.

Even though Jnanadev’s parents drowned themselves as a prayascittam karma [corrective rite], the Brahmins of Alandi would not initiate Jnanadev and his brothers into Vedic study through the upanayanam [sacred thread] ceremony without a letter from the Brahmins of Paithan [a village in Maharashtra about 300 km from Pune]. At Paithan, Jnanadev and his brothers entered lengthy debate with the Brahmins. Jnanadev was expounding the Advaita Philosophy. The Brahmins were irritated with the precocious wisdom of the child Jnanadev  and his bold claims that everything in the universe was fundamentally the same consciousness. They were also making fun of his name, which means “God of Knowledge.” At that time, a buffalo came by carrying water, which also happened to have the name Jnanadev. “This buffalo is also known as Jnanadev,” the Brahmins said. “If you are both the same consciousness then he should be able to chant Vedic mantras like you. It was then that Jnanadev placed his hand on the back of the buffalo and it began to chant the first mantras of Rg Veda in perfect meter and tone. (Today, there is even a samadhi site for this buffalo in the village of Ale in Pune District.)

The remainder of the short life of Jnaneshwar, and of his brothers and sister, is filled with miraculous stories and moments of philosophical triumphs throughout the state and the country. One such story involves Jnaneshwar demonstrating his yogic power to animate insentient objects by “riding” a wall. This wall still stands in Alandi.

The Jnaneshwari was the first commentary written on the Gita in a language other than Sanskrit. Jnaneshwar desired to bring the wisdom of the text to the common man of Maharashtra, and he knew this was only possible if he broke with tradition and composed it in Marathi.

When Jnaneshwar was only 22, he told his friends and siblings that he desired to enter maha-samadhi, which he did on a cave in a hill in Alandi on the 13th day of the dark half of the month of Kartik in 1296. He was still alive when the tomb was sealed. It is said that anyone who read the Bhagavad-Gita at his samadhi will have all his doubts removed.

Swami Sivananda writes, “Within a period of 25 years, they [Jnaneshwar and his siblings] broke down the bigotry of the Brahmins of the period, raised them from the darkness of ignorance, firmly established the path of devotion and knowledge, made people realize that all were equal and that it was the actions which counted for the glory and excellence of a man and not the accident of birth or the mere study of the Vedas and Vedanta.”