Gita Jayanti marks the anniversary of the day Lord Krishna gave his immortal message to Arjuna on the battlefield of Kurukshetra. The Bhagavad Gita is an exquisite discourse given to Arjuna by Lord Krishna, at the moment when Arjuna faced the most difficult situation of his life. Arjuna was a warrior of high repute; he had power and fame; he was endowed with all the qualities necessary for a man of his position, but when he faced the real challenge of his life, he was unable to meet it on his own. Recognising his own limitations as a human being, he surrendered to Lord Krishna. The Lord gave him instructions on how to live an inspired life, and how to deal with situations in life. It is a profound spiritual teaching, a guide to the Truth. In the Gita, the Lord teaches Arjuna about the immortality of the soul, the nature of the world and the Consciousness illuminating everything.

The message of the Gita is not to make us passive idealists, but to help us be active and courageous in life.

As Amma says, “It is a celestial song that awakens the sleeping soul. The purpose of learning Gita is to become Sri Krishna.” 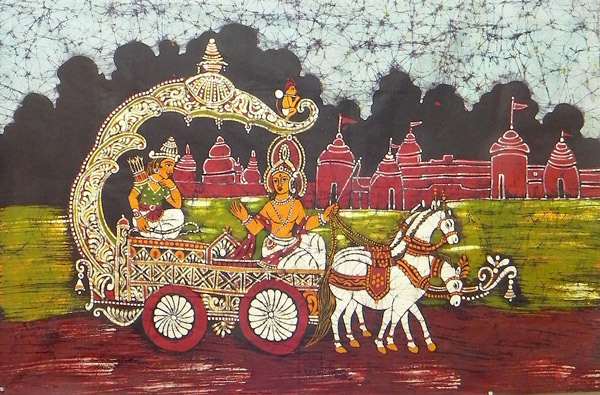 Lord Krishna says:
Arjuna, your sorrow is sheer delusion.
Wise men do not grieve
For the dead nor for the living.
If you think that this Self can kill
Or think that it can be killed,
You do not well understand
Reality’s subtle ways.

You have a choice to your actions,
But never to your action’s fruits.
Act for the action’s sake.
And do not be attached to inaction.
Self-possessed, resolute, act
Without any thought of results,
Open to success or failure.

The Bhagavad Gita forms a part of the ancient epic poem the Mahabharata, written by Sage Vyasa. The Mahabharata is the longest poem ever written; it is eight times the length of the Iliad and the Odyssey combined! It is the story of the great war between the Pandavas, who were on the side of Dharma (righteousness) and the Kauravas, who, though relatives of the Pandavas, were an Adharmic or unrighteous people. Sri Krishna first tried to counsel the Kauravas on the right course of action. When they refused to listen, the Lord generously offered the whole land to the Kauravas, save one house for the Pandavas to live in. It was only when the Kauravas swore that they would not give one blade of grass to the Pandavas, that Sri Krishna advised the Pandavas to go to war. He knew that if the Kauravas were allowed to rule, the whole country would be plunged into adharma, chaos, and destruction.

The teaching of the Gita takes place right in the middle of the battlefield, between the two armies, just as the war is about to begin. In the Gita, Lord Krishna teaches that spirituality is something we have to live in our day-to-day life – it is for everyone, and is especially applicable to all who want to live life to its fullest potential. It’s a book for happiness; how to live a life full of happiness and contentment.

In his doubt and confusion, Arjuna reached a state of helplessness. He sought Sri Krishna’s guidance and help. It was then that God poured forth His message. When the disciplehood awakened in Arjuna, he became a vessel fit enough to receive spiritual knowledge, and the Lord could correct his attitude. Amma says that it is only when we have surrender that God can shower His Grace upon us.

Arjuna was transformed by the teaching that Krishna gave him. Sri Krishna did not change the external situation (paristhiti), but changed the mental attitude of Arjuna (manasthiti). In the battle that followed, Krishna proved that he was a living example of what he had just taught. He was the only one on the battlefield without any weapons, and yet there was a radiant smile on his face throughout. At the end the Pandavas emerged victorious, symbolising the victory of dharma over adharma.

The Gita is one of the most beautiful pieces of philosophy ever written. It shines as the beacon light of knowledge, inspiring millions to tread the path of Dharma.