One of the most anticipated and lively festivals in India, Sri Ganesha Chaturthi is dedicated to the beloved elephant-headed god, Ganesha. Worshipped throughout the world wherever large Indian populations are found, the fervent devotion and colorful celebrations which attend this festival reveal just how vital Ganesha is to the spiritual heartbeat of India. 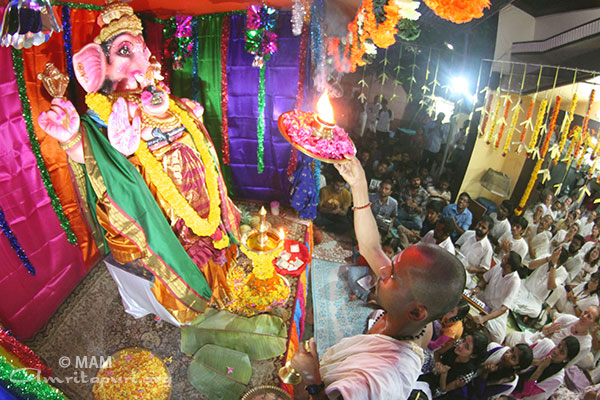 Even though each Hindu deity represents only a few aspects of the one Lord, devotees in India naturally tend to hold dearest one form more than another, for instance maybe Shiva more than Krishna, or Rama more than Kali, etc. However, all easily love and worship Lord Ganesha. He is said to be the remover of obstacles and a bringer of good fortune. Add to this His plump belly and cheerful nature, and it’s no wonder that everyone adores Him! Therefore, before any worship is offered, or beginning any undertaking whatsoever, Ganesha is propitiated. This is why His image is found in all temples and on all altars. His blessings ensure smooth sailing!

As with all of the Hindu deities, the symbolism of Ganesha is multi-layered and profound. He represents Pranava, the seed syllable OM. Just as Ganesha comes first before the other gods, OM comes at the beginning of all other mantras. The symbol for OM even resembles an elephant head! OM represents the Nada, the original substratum of Creation, from which all else arises. That substratum is identical to our essential nature, the Self. Usually depicted riding a mouse (the ego), Ganesha represents the Self in its complete conquest over egoism. He is also depicted holding an ankusha (goad), which represents His Lordship over the entire world.

There is a symbolic story {read the story} that tells of how Ganesha came by His elephant head, and received the honour of being worshipped before all of the other gods.

Traditionally held to be Ganesha’s birthday, the Chaturthi day itself falls on the 4th day of the bright fortnight of Bhadrapada* (August-September). Then it is proceded over a week of pujas, bhajans and cultural programs. A clay idol of Ganesha is made and worshipped on all of the festival days with prayers and devotional songs. The festivities culminate with the Ganesha Visarjan, where the idol is carried in a procession to the sea, river, or other large body of water, to be ceremonially immersed. The symbolism of this immersion ceremony reveals that at the heart of worship of different deities there remains the profound understanding that all forms are temporary, having both their origin and final destination in the formless Absolute.

—–
*Bhadrapada is a Hindu lunar month.