Orissa is one of these states in India which undergoes flooding in one part of the state or the other during the monsoons. The annual monsoon season though eagerly awaited, by the farmers of Orissa are also the bane of development or the cause of their sorrow as the river Mahanadi regularly overflows in the Cuttack/Bhubaneswar belt, causing huge loses to the farmers and also destroying property and places in its wake.  This year too after more than a decade, there was heavy rainfall in the catchment area as a result of which the river Mahanadi (which means the great river), got heavily flooded and inundated the Banki area of Cuttack in Orissa. It even entered Cuttack city and people of the city had to move to upper floors till the water receded. The floods were so devastating that the Prime Minister of India after visiting the area declared it as a National calamity. The ashram representative Br. Sadasiva visited there and offered relief materials.

During our relief work the MAM distributed several 1000 blankets, medicines, tarpaulins, relief kits, educational kits and other rations to the badly affected flood victims of that region. The flood victims were very grateful to the representatives of the MAM for having come form so far to distribute these relief materials. 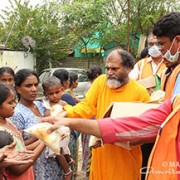