Amma consecrated the 22nd Brahmasthanam Temple in Manjeri, Kerala on 23 April 2015. The first temple was consecrated in Kodungallur, Kerala in 1987. ( see the list of temples)

Amma reached Manjeri on early on the 22nd after her Singapore, Malaysia, Australia yatra.

Thousands had come to join this auspicious occasion of the installation of the temple–from all over India and around the world. A group of American devotees came all the way to India to witness the temple consecration. Amidst the chanting of ‘Om Shiva Shaktiaikya Roopinyai Namah’ and the traditional percussive sounds of panchavadyam, Amma started pujas at ten in the morning for the kalasas, or pots mounted on the temple. 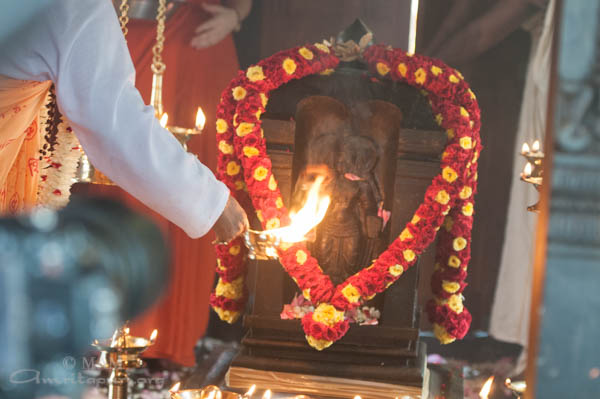 As Amma invoked the blessings of all beings and nature, she was in an ecstatic mood, her eyes revealing something of that which is beyond.

Tazhikakuda consists of three brass bowls set vertically on a central spike, each smaller than the one below it. Amma filled each pot of Tazhikakuda with navdhanya (nine types of food grains) before placing it. Then Amma did abhisheka to eac pot, which contains water energized by days of mantra japa. Then she did arati to it, prayed, invoking the divine, showered flowers all around, and sat in meditation for some time.

Finally she entered the temple. The 250-kilogram murti, having undergone a seven-day process of purification, was brought into the temple and the doors were closed and Amma installed the deity. Devotees continued chanting and the whole atmospere was charged with energy. After 20 minutes, the temple doors were opened. Amma performed arati to the newly installed murti, pouring another 108 kalashas of mantra-infused water. It was such a charming sight to watch Amma doing abhisheka, lost to this world, in a divine mood. 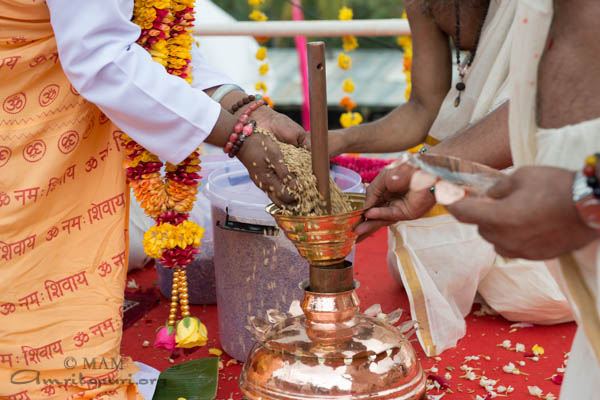 Later Amma started her satsang, noting that the real installation of god has to be done within one’ss heart. Even though each one has different dharmas (duties) to be performed at different stages of life, Amma said that our supreme dharma is to realize God. That is the purpose of life, Amma reminded the assembled crowd–you get into the pond to clean yourself and get back out, not to drown there.

In the evening there was heavy rain and thunderstorms. It is unusual to have such heavy rain in the summer. All the stalls were drenched in water. You could see an umbrella on Amma too since the stage was also leaking but Amma continued giving darshan. Devotees came with drenching cloths and wading in water on the floor. The scene called to mind Amma’s first visit to Manjeri, in 1996, for an evening program. Back then, it started with drizzle and by midnight it had become a downpour. Yet neither Amma nor the people would stop or leave. {see pics}

For such a large program to be successful, many volunteers are necessary. One could see AYUDH volunteers and Amrita Vidyalayam students serving everywhere with joy and enthusiasm. Everyone was happy to be part of this addition to the constellation of Amma’s Brahmasthanam Temples, each one burning brightly in the minds and hearts of the devotees, like a star illuminating the night sky.

The two-day celebrations came to an end at 1:15 am with Amma singing the song “Mariyamma, Mariyamma Shankari Taye…” and with the devotees taking Amma into their heart and installing her love there as the real temple which will always remain with them, wherever they may go.