Amma has been in Singapore for three days of programs at the Marina Sands Hotel. These programs mark the 28th year that Amma has been coming to Singapore. Her first visit was in 1987.

Traditional North Indian drummers and a traditional Balinese dance known as Pendet greeted and welcomed Amma each day at the entrance to the hall. 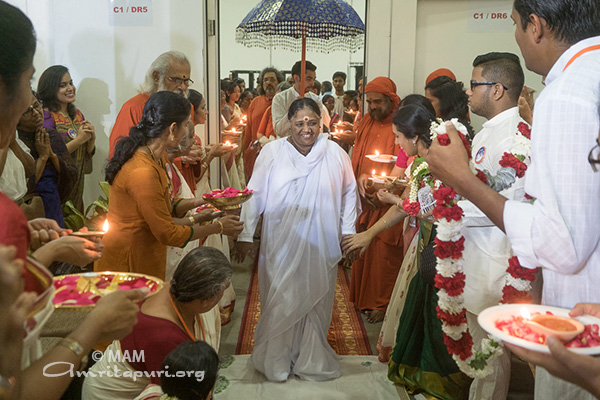 On stage, Amma was garlanded by two representatives from the Inter-Religious Organisation (IRO), Singapore – Venerable Phrapanyadhamvides Chackhun Rian (Buddhist faith), and Venerable Alladad Khan (Muslim faith). With Amma’s blessings, these guests led everyone in a silent prayer for world peace and harmony.

Mr. Khattar is a well-known philanthropist who was honored by the Indian government with the Padma Shri civilian award in 2011, felicitating Amma said that “My wife and I are really delighted that we are offered this privilege. Amma personifies all that she and her society stand for. This is unique and it is so wonderful to see this happening on the videos being shown here as well as in real life.” 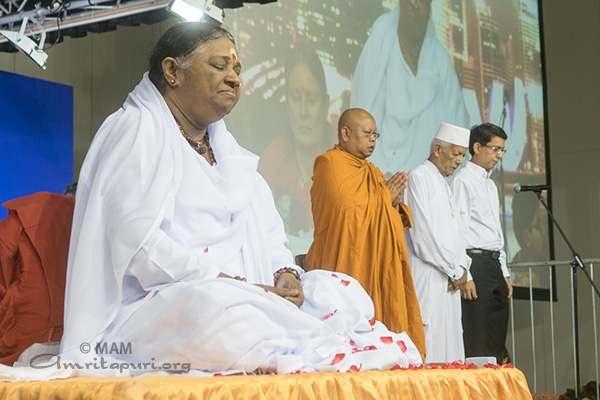 Continuing Embracing the World charitable activities, the Amriteshwari Society announced that they are giving out educational stipends to 100 students. Guests aided Amma in handing out bursaries to the first 30 recipients.

During the programs, the Amriteshwari Society of Singapore sponsored 60 free mammograms to women over 40 years of age. Screenings were held in a medical trailer next to the hall.

During the program, everyone enjoyed a beautiful Balinese dance depicting scenes from the Ramayana, followed by a dance by the Balakendra students about the life of Krishna.

The Singapore Balakendra students presented a number of performances, including dances and chanting, followed by a skit portraying the story of how Shankaracharya was able to obtain his mother’s permission to become a monk.

After Devi Bhava Amma travelled to Malaysia for her program in Kuala Lumpur.