Amma arrived to Bangalore by mid-night, after a stop at Sri Rangapattinam, in the evening to the warm welcome of hundreds of devotees, including many students of Amrita University. 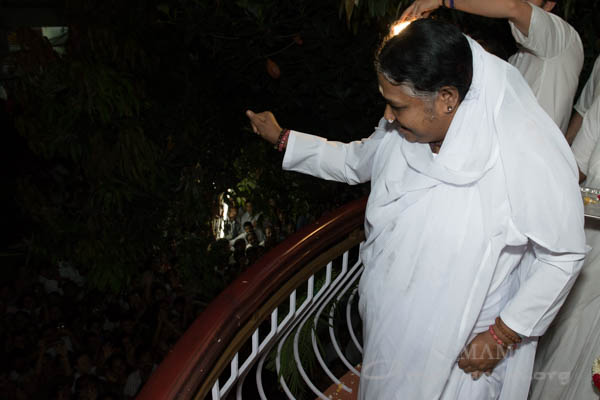 The following evening, Amma served prasad to a hall full of devotees and students. Amma sang for all gathered. Everyone present was brimming over with happiness.

Students of the Veda Gurukulam, welcomed Amma to the stage with Vedic chanting. 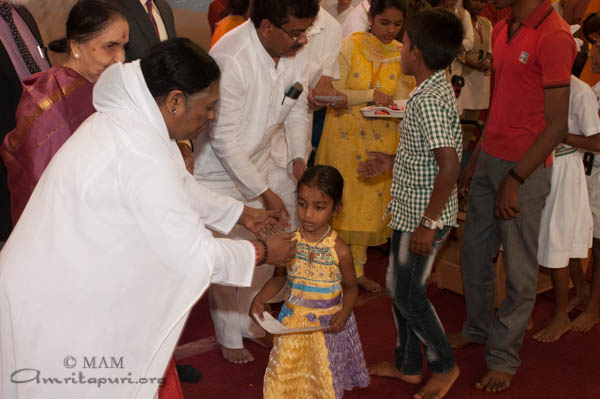 Many cultural programs were staged by Amrita Vidyalayam and Amrita University Bangalore students. A highlight of the last evening was an elaborate dramatization of the Ramayana by the Amrita University students of the Bangalore campus. The costumes, acting and original music were superb. Ravana’s ten heads were creatively portrayed by ten students standing together. The students staged this epic in an epic way!

The Bangalore program is special because of the incredible active participation of hundreds of students from Amrita University. The students were seen in every corner of the program site. Unloading the sound system truck, answering questions at the ‘May I Help You Desk’, giving out water to the devotees, setting up the hall, and helping direct seating, the students tirelessly served wherever they were needed.

One student was washing dishes early morning by the snacks canteen. Later in the evening the same boy was there still washing dishes. He was asked “Don’t you have a replacement? You have been here all day!” He replied enthusiastically “I cannot leave, it is my duty—I am the supervisor!” Such was the dedication of the students volunteering their time and effort to serve the devotees at Amma’s Bangalore program.

At the finish of the last evening’s darshan, Amma treated everyone present to a new Hindi song ‘Aaye he sare jaha yaha..’
The devotees cried “Mata Rani Ki Jai!!!” as Amma, smiling at all, stood up from her darshan seat, concluding this year’s Bangalore program.

As Amma walked back to her room, the student group surprised her by asking to have a photograph, standing on her steps. And Amma humbly obliged.