From the Tanur programme, Amma drove straight to Mysore in Karnataka. A big crowd, mostly students of Amrita University, Mysore, welcomed Amma. Amma led a meditation, sang bhajans and served prasad to the crowd of students and devotees. Amma was given Holi colors and she continued playing Holi, to the delight of all present. 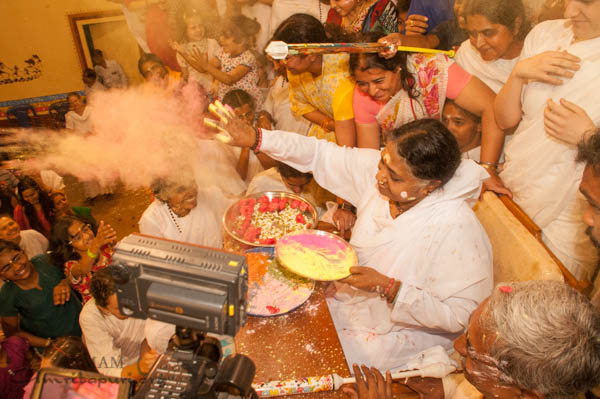 Just as Amma left the stage, it started raining heavily, which is very unusual for this time of year.

The program site was set up by the Mysore ashram, the Amrita Vidyalayam, and Amrita University as all three share the same campus.

Amma conducted the manasa puja in the Kannada language, and when she finished the devotees clapped happily! She also sang many new Kannada bhajans.

Many young people from all over the world, who had never met Amma, came from nearby yoga schools to attend the three hour program and receive Amma’s darshan. According to the international greeting team stationed at the entrance to the program, the young people could not contain their joy after having had their first darshan with Amma. 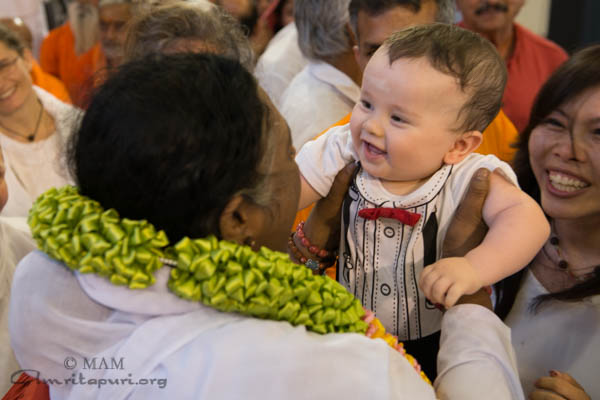 One young man from New York said, “Thank you so much for helping me, it was a beautiful experience receiving a hug from Amma. I will never forget it, and I will come to see Amma when she comes to the US!”

The Amrita Vidyalayam and University students presented different cultural program on both days of the program.

Amrita University’s Mysore campus students, in the recent months, have won awards in state and national level competitions in a wide variety of academic and extracurricular subjects. Amma took time out to pose for a group photo during her darshan.

Amma concluded the last darshan by singing to the devotees. The students and devotees sang and danced to Amma’s ecstatic bhajans.