Encouraged by Amma’s message that everyone should be able to eat vegetables grown organically at least once in a week, the college students at Amrita University’s Amritapuri campus have started an organic vegetable garden using natural methods of cultivation. The garden is flourishing with the growth of colorful, delicious produce, including spinach, okra, tomatoes, tapioca, green chilies, cauliflower, pumpkins, and bananas. The students take turns coming every day to water and tend to the plants, with Wednesdays set aside for all the students to work together. When a plant begins to produce fruits or vegetables, the students are always keen to offer these first gifts of nature to Amma. 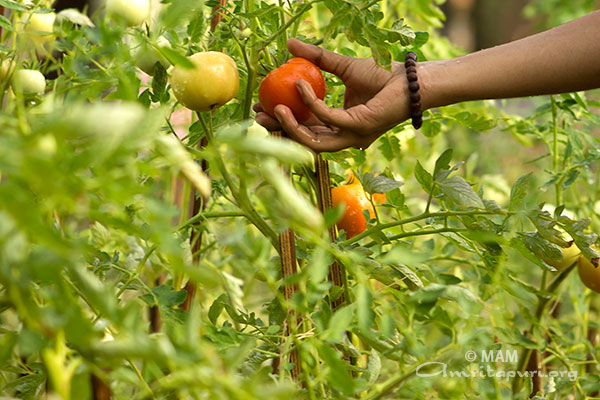 Let the Birds Also Benefit
Amma herself has played a prominent role throughout the evolution of the garden – from the time she blessed the first seeds to be sown, up until now – as she continues to answer the students’ questions. Recently, a few students asked Amma how to address a consistent problem they have been facing – the birds in the nearby area had taken to eating the tomatoes even before they were plucked. Amma beautifully replied, “It’s alright; let the birds also benefit from the garden. In fact, we should be giving them the tomatoes first. Aren’t they also a part of the same nature that we are trying to reconnect with?”

With their continued determination and enthusiasm, the students plan to expand the garden to accommodate a larger variety of fresh produce, with a long-term goal of making the Amritapuri campus 100% organic.