Amma held a public programme on the grounds of at her Amrita Vidyalayam school in Kanyakumari.
Amongst the dignitaries at the function were Swami Chaitanya Maharaj and Pon Radhakrishnan, Minister for Surface Transport. 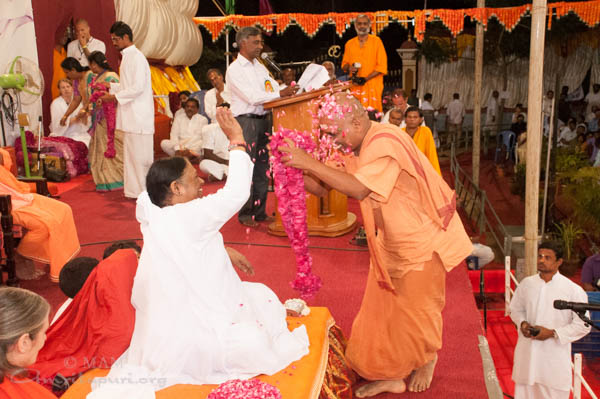 Kanyakumari being the centre of the Vivekananda Kendra, many of it’s members came and payed their tribute to Amma.

In his welcoming speech, Swami Chaitanya Maharaj said: “At the Parliament of Religions of the World in Chicago, Swami Vivekananda started his speech by addressing everyone as “my sisters and brothers”. It was his vision to see everyone as brothers and sisters. Amma is doing the same – she is traveling all over the world and by her embrace and spiritual message proclaims that all are the children of one mother. Amma has no expectations from anyone and she keeps giving spiritual and material welfare to all who come to her. She sees all as her children and she doesn’t encourage any conversion. If Bharat (India) dies, the world will die. But Bharat won’t die, it will give peace and love to the entire world. Amma takes the message of Bharat to the whole world. Swami Vivekananda had the vision that the Bharat Mata (Mother India) is sitting on a throne, guiding people. His vision has came true now. Bharat Mata is sitting here in the form of Amma, guiding the whole world.” 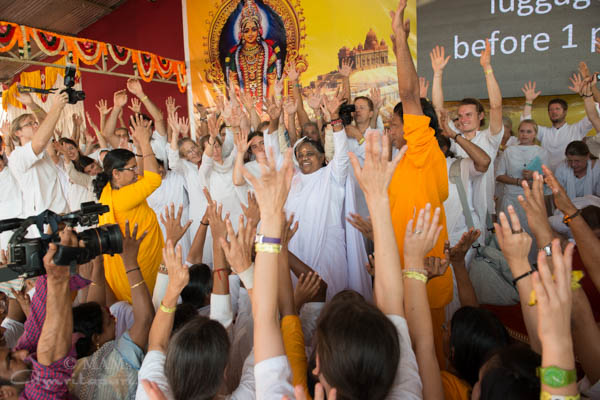 The students of various local schools actively participated in the Amala Bharatam Campaign, cleaning the entire programme premises and educating the the public about recycling and composting.

Earlier, upon arrival in Kanyakumari on Jan 21 Amma held satsang and bhajans and distributed prasad dinner to one and all on the rooftop of the Amrita Vidyalayam.

As darshan came to an end on Jan 23, the sun was rising over Amma’s shoulder. Another day had started – a day when Amma was to console and guide thousands more along the path of love and peace.