Amma’s children in Ireland welcomed her to the country with open arms and hearts as she arrived in Dublin for a two-day programme on the 31st October and the 1st of November. The Irish hospitality was at its best and evident to everyone who participated in the program. The beautifully decorated National Show Centre was buzzing with people on both the days of the programme. 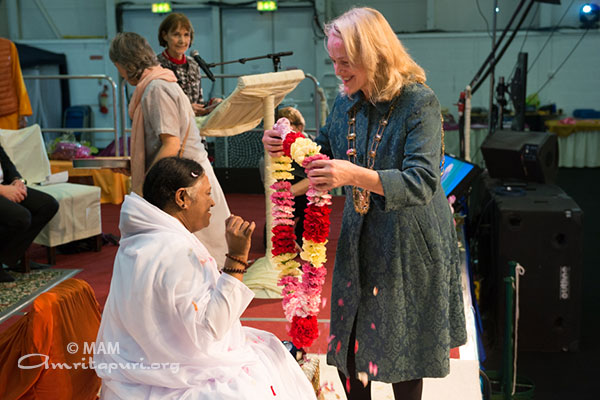 On the 31st evening, welcoming Amma to the country, Mr. Thomas Pringle, Member of Parliament of the Government of Ireland, thanked Amma for the support and encouragement she has given her Irish supporters to keep the Irish culture and language alive and celebrate that culture. He added, “Amma has directly touched the lives of 33 million people around the world, passing on a message of love, respect and positive energy to each and every one of those people. If each of those 33 million people could pass on the same message in their daily lives, just by doing the simple things, making time for each other, and sharing compassion, I think we could effect a real change in the world.” Mr. Pringle also said, “I think I speak for everyone here tonight when I say, Amma, we know you are extremely busy, but please find time to visit Ireland every year from now on.”

Also present on this occasion was the Mayor of Fingal, Mrs. Mags Murray whose speech also drew roaring applause from the gathering. In reflecting on Amma’s significance in today’s world, she remarked, “In this world, and in the busy lives that we lead, we all need something to believe in. That belief can make us feel better, happier, and stronger and give us something to look forward to. That’s an incredible power for one person to carry around and to touch the lives of so many people.”

One of the highlights of the Irish programme has been the traditional music and dance performances. This year as well, many well-known bands enthralled the audience with their songs and music and had the whole hall up on their feet, swaying to the beat and dancing in joy.

As the programme came to an end, one could see teary eyes all around the hall. Devotees lined up all the way to Amma’s vehicle with a collective prayer in their hearts and lips, “Amma, please come to Ireland every year.”