The Zenith Omega Hall was packed to capacity as Amma entered the hall for the programme in Munich on October 11, 2014. The amazing Bavarian choir group, dressed in the traditional attire, welcomed Amma as she walked to the stage to meet the thousands assembled there. The three day programme had people coming from the neighbouring countries of Austria, Hungary, Slovenia, Croatia, Poland and the Czech Republic. 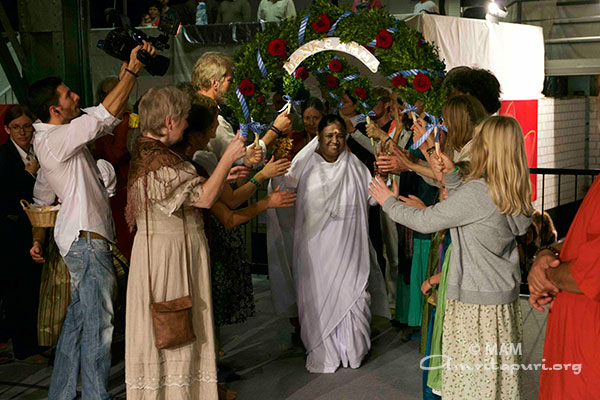 In the start of one of her talks, Amma said, “From all different parts of the world, rivers, lakes and streams meander their way through various forests, mountains, valleys and plains, ultimately merging into the ocean. Similarly, Amma prays to the Paramatman that all her children – who have assembled here today from diverse corners of the continent – reach the endlessly vast ocean of God-Consciousness.”

If there is a word missing in Amma’s dictionary, it is the word ‘rest’. On the first day, though Amma had arrived in Munich after a 16-hour drive, there was not even a sign of fatigue on her face as the darshan kept going into the early hours of the next day. The programme on the remaining days also followed the same tempo.

To enter and leave the Zenith Halle, Amma walked along a long balcony above the crowd of devotees that filled the hall each day. It was always a beautiful and celebratory scene to see Amma slowly walk along the balcony looking down to all the applauding crowd, each one eagerly waiting to drink in every glance of Amma.