The keynote speaker of the Women Empowerment Celebration conducted by AMMACHI Labs was the Governor of Kerala, Her Excellency Smt. Sheila Dikshit. Standing alongside Amma and the other dignitaries, Governor Dikshit helped distribute awards to a couple dozen of the 1,500 women who had come to Amritapuri Ashram to participate in the celebration. She then delivered a speech praising the efforts of the women, of AMMACHI Labs, of Amrita Vishwa Vidyapeetham and of Amma. 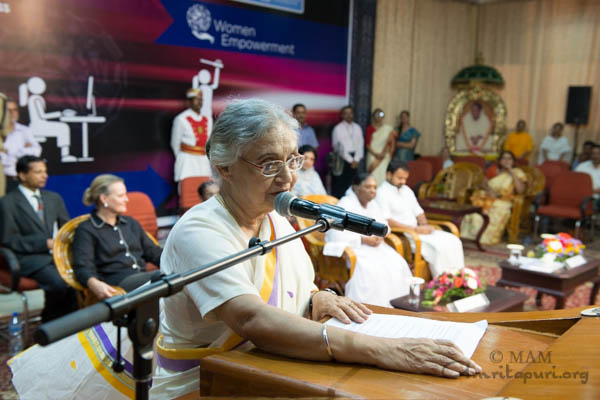 “The United Nations, as we all know, is a worldwide organization, and when it choses projects, it choses them very carefully,” Governor Dikshit said. “The fact that this project of Women Empowerment done by the Amrita Vishwa Vidyapeetham [was chosen] is in itself a great honor for all of you, for all of us and for the nation.”

Governor Dikshit then stressed Amma’s role as an empowerer or women. “It’s Ma who is making this dream come true,” she said, “[making sure] that it is not just spoken about but that, actually, we do attain the emancipation which comes about after we have become powerful both economically, in the community, in the family and, ultimately, also politically.”

Governor Dikshit then spoke at length about the Mata Amritanandamayi Math’s Amrita Kuteeram homes-for-the-homeless project, through which Amma’s ashram has constructed more than 45,000 homes throughout India to date. “If dignity really has to come to civilization, and to societies, and to homes, and to families and to people,” said Governor Dikshit, “then having a good roof over their heads is as important as anything else. Health is important, education is important, developing a skill to be able to earn your livelihood with dignity and with grace is important. But equally and even more important, to make all this really come to its full flowering is a home, is a roof over one’s head.” 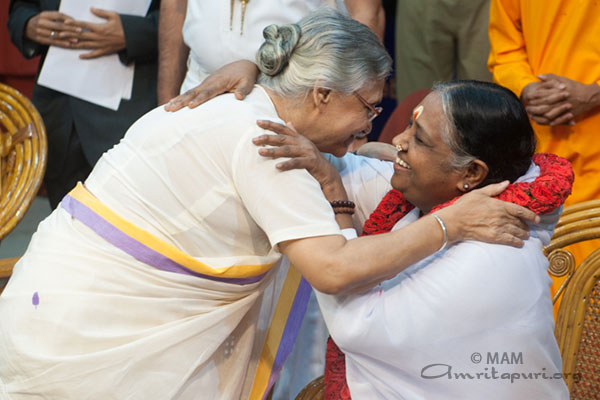 Governor Dikshit then again focused on Amma, saying, “Amma—in the spirit with which she works with love and compassion, with an ever-smiling face—gives us all the courage to stand up and live by the ideals that she has taught us… That in itself is something. As was said by a speaker just before me, ‘She is the greatest saint we have today.’ And this country, and Kerala particularly, is very happy and very lucky to have her presence here. … I have had the honor of meeting [Amma] every time she has come to Delhi. Every time … she leaves behind a spirit which is inexplicable in words, but which brings calm and peace.”

Governor Dikshit concluded by offering her salutations to Amma: “Let us bow our head before Mata for having guided all towards this moment of glory and also set a standard of humanitarian service to all of those of us who aspire to serve. So, my very sincere and humble namaskar to Ma on behalf of myself and all of you. And thank you very much for the United Nations for having recognized and supported this great initiative. And, last but not least, my heartiest congratulations to all of you who have participated in this program and are going back to wherever you have come from—Tamil Nadu or Kerala—with greater sense of confidence and greater sense of dignity. Thank you very much. Jai Hind.”