Around 4:15, Amma came to the beach for meditation with the ashramites and visiting devotees. When it was over, she asked an ashramite from Germany to speak. He told a story about how, when he was helping Brahmachari Shubamrita with a program in Europe, he had taken the opportunity of a question-and-answer session to use the toilet. When he walked back in the room, everyone was staring at him and smiling. It was then he realized that he had never turned off the wireless microphone he had been wearing. 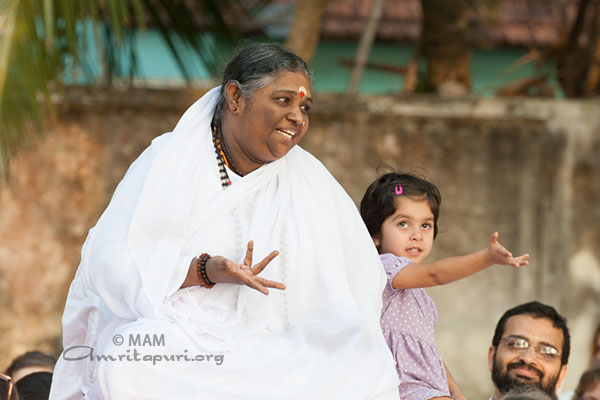 Hearing his story, Amma and everyone assembled had a good laugh. Then Amma began to speak:

“Children, there is something to learn from each and every situation in life. These days, we have information but no discrimination; we have knowledge but no awareness.

“A few years back, a devotee came for darshan. He was crying because he had been arrested. He had been suffering from a rash. While he was riding on the train, it began to itch. He began to scratch. A few stops later, two police officers walked up to him and arrested him. He had no idea why. Later he found out that a lady who had been sitting on the opposite berth had reported him as a pervert. The poor man hadn’t realized where he had been scratching!

“Another devotee once told Amma a similar story. He had been laying on the top berth of the train looking at his mobile, which had his girlfriend’s photo on it. But a girl sitting below him had thought that it was her photo. She reported him to the police saying that he had been photographing her against her will.

“What we need is awareness. Most of us act without thinking. And those of us who do think rarely act properly. We lack sraddha [alertness]. When you are hot, you turn on the fan, but if it hasn’t been cleaned properly, then it will only blow dust and grime on you. You spend the day filling the water tank, but at night it is still empty. Why? You didn’t see the hole in the tank’s side.

“Children, try to cultivate awareness with regards to each and every word you say. All it takes is one careless word from a prime minister to start a war. Words have more power than many of us think.”

Amma shared the following story to illustrate her point:

Once a guru was teaching his disciples Vedic chanting. He was so engrossed in his teaching, he didn’t see that the king had arrived. When he realized, he welcomed the king. The king asked the guru, ‘Chanting all these mantras… What is the point? Isn’t it a waste of time?’
A scowl came over the guru’s face. ‘Get out!’ he told the king.
The king said, ‘Why are you getting so upset? I just asked a simple question.’
The guru shouted, ‘I said, ‘Get out!’
The king said, ‘Who are you to tell me anything? I will have you beheaded!’
Hearing this, the guru smiled and he said, ‘Are you so sure there is no power in the chanting of mantras? Just two common words turned you into a killer. What to speak of the power of the repeated chanting mantras, which contain bijaksharas imbued with the sankalpa sakti of our rishis.

“Children, awareness is the essence of spiritual life.”