Amma and the group arrived in Detroit on Nov. 24th with the programs beginning the very next day. If it was rain in San Ramon, it was the first snow shower for the season in Detroit. Seemed like Mother Nature wanted to join Amma in showering love on Her children. 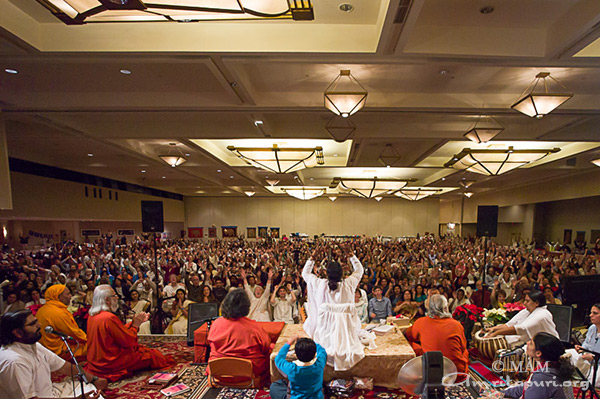 The five-day visit to Michigan comprised of two days of public programs and a three-day retreat. It was the time for Amma’s east coast children to come together, some even driving for 16 hours in the wintery conditions. On the second day, the students of Kala Kshetra, a fine arts school based in Michigan, put on a beautiful set of cultural programs. The performances ended with traditional Kerala “chenda” performance by a group of men. As they went to get Amma’s darshan later, Amma exclaimed to them “Amma saw Kerala, right here”.

An interesting question was posed to Amma during the question and answer session during the retreat. Amma was asked how to find the balance between compassion and detachment. Amma’s answer was swift but profound. Amma said that in reality there is no difference between detachment and compassion. When one has detachment, there is automatically compassion. Amma said, “See everything as God and compassion is nothing but seeing others as your own self. One who as no attachment would not see others different from him and would have only compassion for them. Like a seed has the potential of a full grown tree within itself, the divinity is within us. We need to let it sprout.  The moisture of compassion will make the shell of ego break and let the tree of divinity sprout.”

The second day of retreat saw even more beautiful cultural programs, comprising of dance, vocal and other performances. Probably the one that stole the show was a group dance put forth by Amma’s Michigan children. Dressed traditionally, a big group of them danced joyously to the bhajan Anandame Anandam. As the song ended, someone announced “now we are going to celebrate Amma’s 60th  birthday the ‘Mo-Town’ way.” Amidst cheers, the mood changed and the traditionally dressed dancers began shaking their legs to one of the Stevie Wonder’s popular numbers. Slowly more people joined in and then literally everyone in the hall was up dancing. Watching Her children dancing joyfully Amma threw a couple of “kisses” candies towards them. The excitement reached its peak. All the hands were up in the air to catch the next one coming. And then, there was a shower of “kisses”.

The final evening program ended at 10am the following day. Amma will be back in Amritapuri soon after two months in Europe and North America.