After a drive of over 1100 km from London, Amma arrived in Berlin in the wee hours of Friday, October 25th, the same day that her program there was to begin. Nevertheless, Amma was right on time for her first program at the Velodrom, which at 35,000 square feet is one of Berlin’s largest halls. 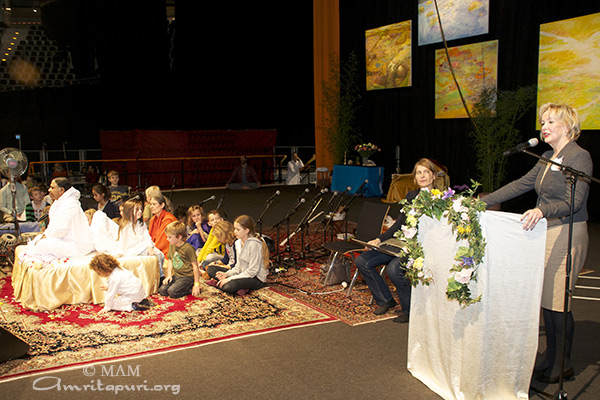 Though it was only the second program in Berlin, the love and dedication of the local devotees was quite evident, and it seemed to overflow from their lips in harmonized strains of “Om Lokah Samastah Sukhino Bhavantu” as Amma entered the hall on the first morning. The throngs of Berliners who filed through the entrance doors that day apparently shared the same feeling, as they sat in rapt and silent attention in the hall, waiting for their turn to bask in Amma’s embrace. One could not help but notice the stillness pervading the space, as well as the quiet, orderly manner in which the program attendees flowed through the darshan cue.

During the evening program, Ms. Gudrun Kopp, Member of the German Bundestag (Parliament) and Parliamentary State Secretary to the Federal Minister of Economic Cooperation and Development, welcomed Amma on behalf of all of Berlin with the following words. “It is a great honour for all of us to be so close to Amma tonight. In the western world and also here in Berlin, the spiritual power of a being like Amma is something very special, as she reaches our hearts and not only our intellect…. I want to thank Amma from my heart for coming to Berlin and for embracing this city.”

After Amma stood up from her chair at the end of the first day’s programs, before going to her room she broke into a traditional dance to a joyous melody, as the audience burst into gleeful applause and excitement. 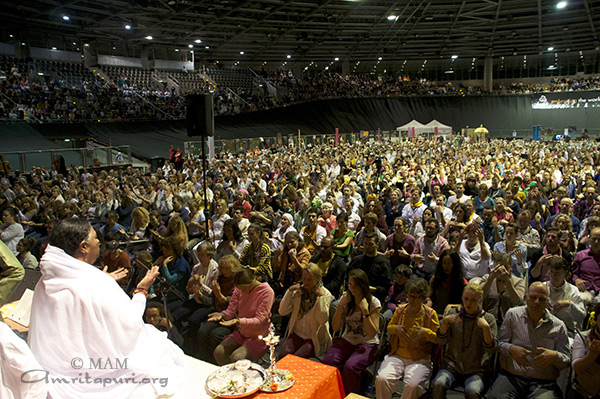 There was also quite active participation in the Berlin program by devotees of neighboring countries. Polish devotees repeatedly brought home-grown squash, engraved with the words “Amma – Please come to Poland!” During the final night’s program, a sizeable delegation from Denmark first presented a long list of reasons why Amma should visit their country, then segued into devotional songs punctuated with fervent pleas to further their cause.

All in all, Amma’s second Berlin program was filled with an air of celebration and delight. As Amma’s vehicle pulled out of the massive Velodrom complex, she left the devotees with countless precious memories, and set out to carry a tidal wave of love and joy to the next destination – the Netherlands.