A group of 100 scientists from all over the world including India, USA, Italy, Germany, Turkey, Russia, UK, and Australia had come to Amritapuri to participate at the International Conference on Biotechnology for Innovative Applications.

The conference, called Amrita Bio Quest 2013, was hosted by Amrita University’s School of Biotechnology at Amritapuri from August 10-14, 2013.

Amma met these scientists and had a very important discussion on various aspects of Biotechnology and Biosciences touching today’s pertinent societal needs. 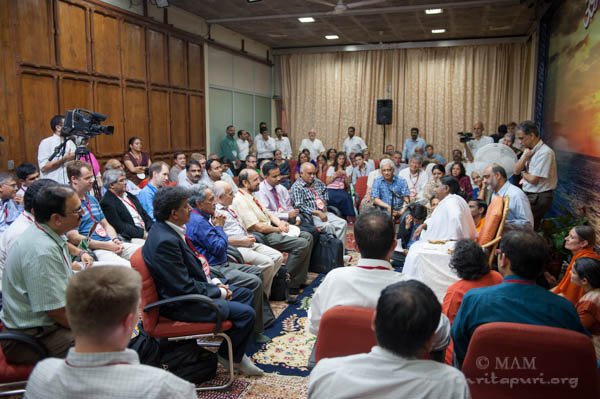 A professor from National Brain Research Center asked about how modern stressful living can be studied while focusing on values and spiritual principles. Amma opinioned that medicine is absolutely necessary. Amma insisted education for life and education for a living are both needed. Education for living can come from traditional schooling while education for life, which is knowing how to control one’s emotions and develop values is also needed along with it- one conditioning the external world via science and another conditioning the inner world via spiritual sciences; both are important. Amma said “Even the Vedas insist on medicine, in fact Ayurveda is part of Vedas. It is said that Lord Vishnu incarnated as Danwanthari Murthy (Lord of Medicine) and shared the knowledge of medicine.”

Medicine in the past has become poisonous
Amma however indicated that the human body had become weaker and the atmosphere is also getting more polluted. She explained that treatment of Tuberculosis used to be around 6 months in the past but today even after an year of treatment, the disease still might not be fully cured. Amma said, applying cow-dung to open wounds used to be medicine in the past but today cuts would become septic wounds if cow-dung were to be used. So things have changed and what was medicine in the past has become poisonous now. We are increasing the intensity and dosage of medicine today. More chemicals are being added and side-effects are also increasing.

Work together for the cause
Amma suggested the idea of different branches of medicine – Allopathy, Ayurveda, Homeopathy, Naturopathy, Yoga all working together to form a holistic approach for the betterment of the society. Amma acknowledged that many of those present in the meeting were great contributors to science and asked them to be alert and aware of the external and internal world and to work together for the cause could help the world.

Prof. Suresh Subramani of UCSD then asked about recombinant DNA and genetically modified organisms. His question was whether we were disrespecting the species by altering its DNA even though it could have huge applications in terms of reducing poverty due to high yield, disease resistance etc.

Amma answered by saying with increasing human population and to avoid deaths due to poverty, such applications are being seen as solutions. However, while we make such seeds we need to add chemicals to make them grow and they will not grow naturally like in the past. Amma indicated that older, more natural seeds were the best but we cannot discard the new system either. With the help of modern seeds, some poverty related deaths have been reduced. Amma said it may not be possible to completely discard old or new methods, but rather an approach using 50% traditional methods, 50% new methods could be used. Modern seeds do not adapt to old fertilizers and natural seeds do not match well with new fertilizers. In fact Amma had tested the effects and found productivity was greatly reduced for new seeds with older fertilizers. Amma’s view is to focus on both appeasing hunger and promoting good health via both old and new systems. Amma said, to her, everything is significant and nothing should be discarded. “The old system was the best but to match today’s world adopting modern techniques may be needed.” 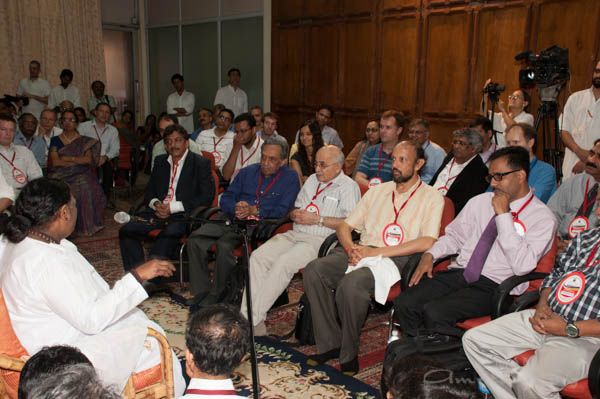 Medical system needs to be studied from its own standpoint
A professor from Turkey asked about the role of citizens in science and extending science beyond scientists.

Amma felt scientists should provide awareness of the pros and cons of science to citizens. Amma is not sure how successful it would be if citizens could make decision on scientific questions. The best for science may be when scientists discuss and approach the problems. Amma indicated the public’s opinion for cloning helped guide a former President of USA and that even Amma had sent an opinion. Amma felt scientists may not approve the role of citizen’s in making decisions for scientists. She used the example of Homeopathy, Allopathic and Ayurveda physicians being constantly in debate when it comes to treatment. Amma then talked about how each medical system needs to be studied from its own standpoint and yet the commonness needs to be sought. Amma insisted that sharing their discoveries and knowledge with society is very important.

There is nothing to be rejected
A question was posed to Amma as to what should be avoided in science. Amma answered that there was nothing to be discarded. Amma used the example of an aircraft engine and a screw. Both the screw and engine have their importance. Amma said, “Missing a vital screw would also make the aircraft unfit. Like that, everything has its place. What we see as useless grass may actual be highly medicinal. Some people drink wheat-grass juices as a health drink. Our ancestors used to do the same except today we give a modern name to it. Seeing this from a spiritual perspective, it is called Love. In Love, there is nothing to be rejected. Every being has a special quality”. Amma used the example of a dog, which many people may see as a useless animal. But where investigative officers may fail to catch a criminal, dogs can succeed. “Answers that are not in science should be searched in spirituality and those not in spirituality must be searched within science,” Amma said.

Most speakers commented on how a blend of dedication, selfless service and Love had transformed their visit to Amritapuri. It was their first time to see Amma’s message of Love, starting with her life and dedication.