As always the day of Thiruonam was a festive occasion in Amritapuri.  Accompanied by Panchavadyam musicians Amma made her way to the stage in the morning to the delight of the packed hall that had come for the festivities.
Amma started the celebrations by sharing her Onam message in which she said, “Onam sankalpa is a time of sweet memories of the past and beautiful dreams of the future. Normally human life is full of sorrow. Amidst all this sorrow, we dream of a future filled with happiness. It is not mere dreaming. There were times like that—times when people lived in love, harmony and unity. It was a time when no one lied or cheated anyone. It was the time when a king ruled with only one goal—the welfare of his people. We dream with longing for the return of such a time. With the return of Onam, we become nostalgic for the values that are fading away before our eyes.” 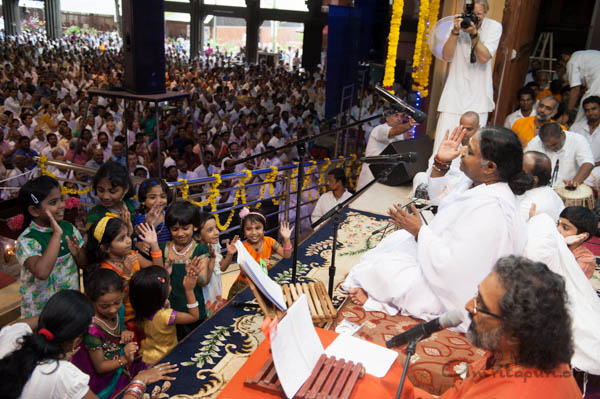 “Most of our festivals are in remembrance of avataras of the Divine Power: Rama Navami and Sri Krishna Jayanti are all examples of this. And Onam is also a day when Lord Vishnu incarnated as Vamana. Regardless, in our celebration of Onam, the focus is not on Lord Vishnu’s avatara but on the return of Mahabali—the asura king—returning to check the welfare of his subjects. This is not without significance. It shows us that where we begin doesn’t make us great. One can be born a god or one can be born an asura. What makes one great is the renunciation of selfishness. The stories of Mahabali and Prahalada are examples of this ideal.”

“Most of you know the story of Mahabali. When Lord Vamana covered the three worlds with two steps, there was no place for him to take a third. But Mahabali still had something he considered his own. That was his ego. That is the reason why Mahabali offered his head and requested the Lord to place his foot on it with his third step. In this way, he managed to keep his promise to the Lord. Surrendering everything he considered his own, Mahabali attained perfection. Like Mahabali, we also have a kingdom—a kingdom comprised of our ego and selfishness. We have to offer that at God’s feet. If we are able to do so, then every day will become an Onam.”

After sharing her message with everyone, Amma guided everyone in a brief meditation and then asked everyone to get up on their feet and sing and dance with all their hearts, forgetting all their worries.  First Amma led everyone singing Bandalo Bandalo, followed by Madhava Gopala and finally Tannana Tanne as the whole hall rocked in celebration.

As soon as the singing ended Amma gave darshan just long enough to allow the stage to be converted into an Onam Sadya (prasad lunch) serving station.  Once all the dozens of huge pots of rice, sambar, avial, papadams, banana chips, payasam, etc were ready on the stage, Amma shifted from darshan to serving prasad to everyone.  It took more than 2 hours to serve all the 1000’s of people who had packed the hall.  Once all the human ashramites got their prasad, the largest ashram resident waited patiently in the hall for her serving…Lakshmi the elephant.  Amma lovingly and playfully served Lakshmi handful after handful of everything on the menu.  At the end rather than washing it all down with a bucket of water, Lakshmi decided to spray all the onlookers with her trunk sending everyone ducking for cover. 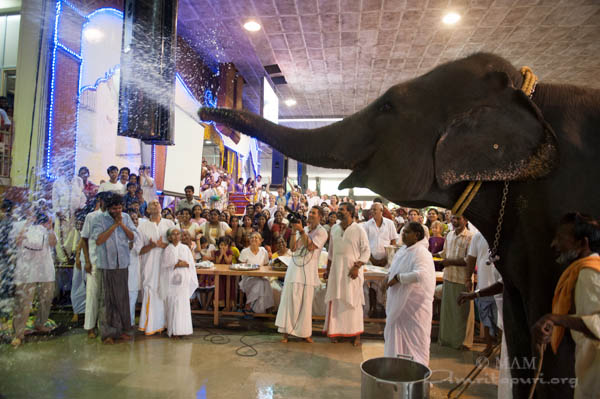 In the evening Amma returned for bhajans and then shortly after dinner to enjoy the myriad of cultural programs on the main stage.  International visitors, ashram residents and students and staff of Amrita University all offered entertaining dances, dramas and music to the delight of the crowd.  Just before midnight to cap off the day’s celebrations Amma led one more song- Varde Varde Maiya, sending everyone to bed with completely full hearts.