On the first day of the Brahmasthanam festival, the guests of honor on the stage were Indira, District Judge, MP Dinesh Superintendent of Police, Indira Krishna Kumar PMG. 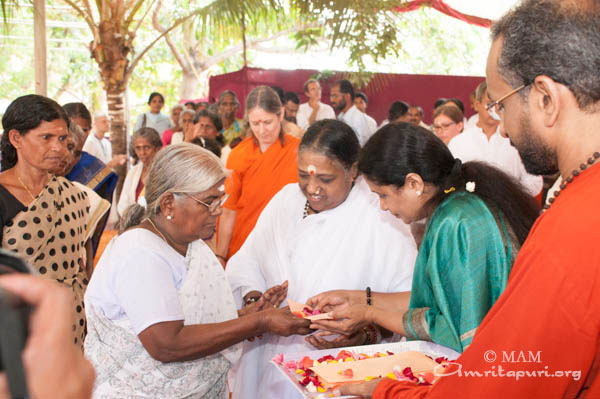 Amrita Nidhi pensions were handed over to new recipients, as well as seeds for organic farming under the Haritamritam programme. This was followed by bhajans, guided meditation, a satsang by Amma and prayers.

On the second day, darshan ended at 4am, with Amma singing enthusiastic bhajans to the great delight of the devotees.

Earlier as soon as Amma reached Palakkad, she walked to the stage and she started passing out prasad dinner plates for all those present. During this long process, using the microphone, she was talking to everyone, giving advice and instructions, and inviting the devotees to share their feelings and stories over the microphone. Afterwards, Amma led everyone in enthusiastic bhajans.
– Tulasi