10 March 2013, Amritapuri
As Amma’s darshan was finishing, Amma’s message for Shivaratri was played on the big screens in the hall. At the end of darshan Amma started singing “Mano Buddhyahamkara Chittani Naham”. It was very moving. Many were in tears. Her innocent voice, the bhava of yearning for God were touching the hearts of thousands assembled. Then she sang ‘Hari Om Namah Shivaya’, and Parama Shiva Maam Pahi.  During one of these bhajans, the ashram dog – Bhakti – made her way to the stage and lay at the feet of Amma. Amma was smiling at her in between the singing. 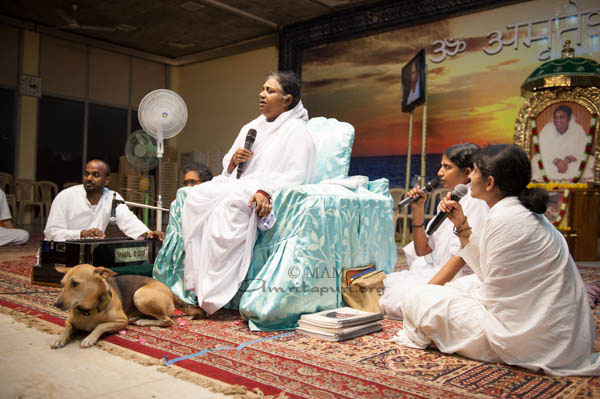 Afterwards she asked everyone to stand up and dance and to the tune of ‘Bolo Bolo Sab Mil Bolo’. Every one was dancing for a long time. But Amma was not done. She continued to sing one more bhajan – Hari Om Namo Narayanaya. At the end she called out Hara Hara Mahadeva, and  Jai Bolo Mahadeva Shambo ki-Jai!