After the programs ended early in the morning in Mumbai, Amma flew the same day to Delhi. The next day after arriving, Amma served prasad to all the local devotees at Amrita Vidyalayam. She also sang bhajans and shared jokes to the delight of all the locals.

The next day Amma addressed the Swami Vivekananda 150th Birthday celebrations {news} at Siri Fort. The following day, Amma visited Old Delhi and just in front of the Red Fort she participated with other dignitaries to flag off of the Shobayatra {news}. 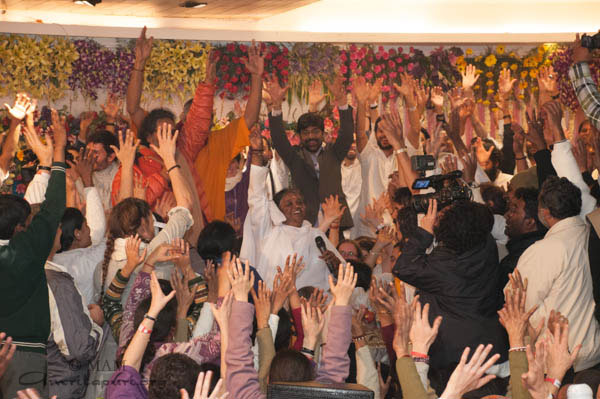 Amma also held two days of public programs in the Delhi Ashram. Amma usually comes to Delhi a few months later in the year, so this year it was very cold, in the middle of Indian winter. The morning program, which included Amma’s satsang, bhajans and darshan continued till after midnight on both days.

At the end of the program on the second day Amma sang ‘Ela Pula Elo’, a Kerala folksong while everyone clapped along and danced all their worries away.