11 January, Siri Fort Auditorium, New Delhi – Bharata Yatra 2013 Amma inaugurated the Swami Vivekananda Sarda Shati Samaroh, the 150th Birth Anniversary of Swami Vivekananda at Siri Fort Auditorium, New Delhi. In her speech, Amma said “We have learned to fly like birds and swim like fish, but we have forgotten to how to walk and live like human beings. Today we have knowledge, but no awareness. We have information, but no discriminative thinking.” 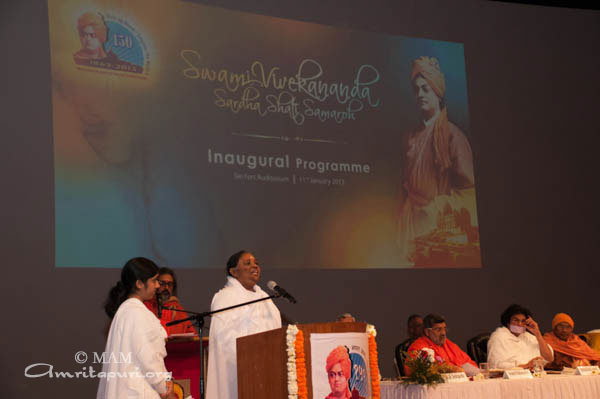 Addressing the gathering of political leaders, religious leaders and other prominent figures in Delhi society, Amma stressed the need for India to live their lives based on the traditional values of which Swami Vivekananda was an embodiment: “In truth, many of the challenges faced by Sanatana Dharma have been self-created. We can blame others and point out the impact of globalization, foreign rule and other factors—and, perhaps, they can be blamed to a certain extent—but they are not the primary cause. The primary cause is our carelessness: we have failed to cherish and protect the invaluable wealth that is this culture.”

Furthermore Amma said that only a reawakening of values would avert future incidents like the one that took place recently in Delhi: “When our children are young and impressionable, mothers need to firmly tell their daughters, ‘You should be courageous. Never let anyone push you down. You should develop strength of heart.’ Similarly parents should teach their sons both the need to protect and to respect women. These days many men are like one-way roads; they need to become like highways, allowing women to also move forward alongside them. The government can change as many laws as it wants and make sentences for sex-offenders as strong as it wants, but unless we raise our children with these values, no real change will ever take place.” 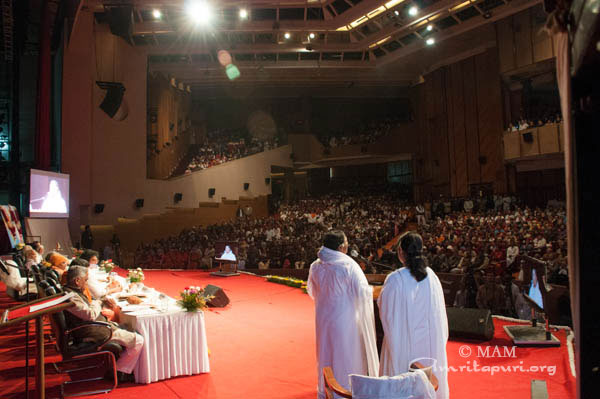 Amma shared the dais with many other great spiritual personalities and sadhus, including, Dr. Pranav Pandya, the head of the Gayatri Parivar; Acharya Lokesh Muni, a Jain Monk; Swami Ritambarananda of Sri Narayana Dharma Samgh; Swami Nikhilananda of Chinmaya Mission, and Mohan Bhagat. The other dignitaries also addressed the audience, giving inspiring speeches drawing from the life of Swami Vivekananda.

Before the program, Amma was welcomed to the venue by the organizers and many dignitaries had a chance to meet Amma before coming to the dais.

The program was officially started with Shanti mantra – Om Sahanavavatu. Amma was then introduced to the gathering by P Parameswaran, the director of Bharateeya Vichara Kendra. P Parameswaran addressed the crowd borrowing from Vivekananda’s words, ‘Bharat Jago, Viswa Jagavo’ – ‘Awake India, Enlighten the World’ expressing that this is the aim of these year long celebrations.

Amma addressed the audience in Malayalam and then she paused every few minutes to allow Swamiji to translate Amma’s words into English. Amma’s speech concluded to a thunderous standing ovation and before leaving the venue Amma briefly gave darshan some guests on hand, including LK Advani, and Nithin Gadkari.

The next day early morning Amma arrived at the Redfort to flag off the procession {news}. Amma is the president of this Samaroah, which will have programs throughout the country during the entire year.