Aryadan Mohammed, Minister for Power & Transport, inaugurated an Amrita Sahaya Nidhi program, wherein families who lost a member in the Sivakasi fireworks-factory explosion were given Rs. 100,000, and those who were seriously injured received Rs. 50,000. Tamil Nadu MLAs, Sri. Thangatamil Selven and Sri. R.M. Palani Swami, helped distribute the compensations.  This was part of the number of charitable activities launched  during the 59th birthday celebrations of Amma. 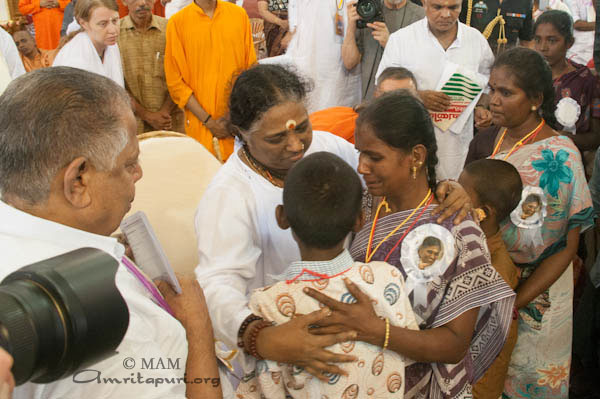 pic: Aryadan Mohammed, Minister for Power & Transport looks on as
Amma consoles one of the families who lost a loved one in the recent tragedies in Sivakasi

Aryadan Mohammed then delivered a speech in which he said, “Amma is the only person  in the world who is completely established in spirituality and works for the world. Amma is unparalleled. For Amma is there is no caste, religion or nation. She is a single entity that is worshiped by the entire world. Amma guides us to peace and contentment. This is why Amma is immortal.” 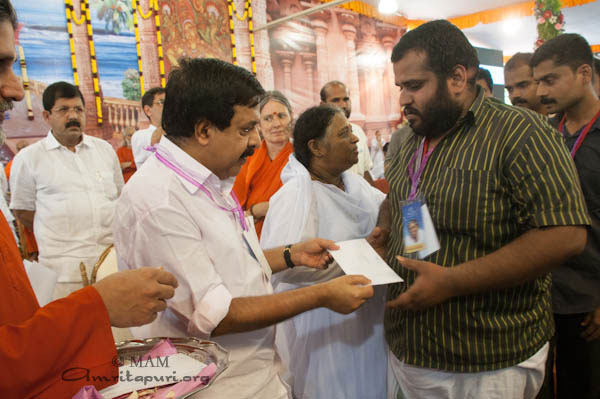 Ramesh Chennithala, MLA and President of the Kerala Pradesh Congress Committee, handed over MAM’s financial compensation to families who lost a member or had a member seriously injured by the Kannur LPG tanker explosion. Families who lost a member received Rs. 100,000. Families who had a member seriously injured received Rs. 50,000. Ramesh Chennithala said, “Amma has given the message of love and tenderness to the world. Amma’s ocean of love is comforting humanity. May this always continue to be so. I pray that Amma will be able to continue her works with strength and overcome all obstacles.”