Onam is a very special celebration day in Amritapuri. Amma’s generosity and love are displayed on this occasion in deeply touching and utterly charming ways.
It was a very rainy day, and everyone expected Amma to come to the stage at around 9:30am, but she surprised everyone by showing up to the stage at 8:50am. With a beaming smile of love and joy, perfect expression of the Onam moods, she delivered her Onam message, which was displayed simultaneously on screens in English for the non-Malayalam speakers. The hall was fully packed with thousands of devotees.

After her talk {news} Amma asked everyone to stand up and put all their worries aside and dance and sing in joy together.  She then led everyone in dancing to Bolo Bolo and Tannana Tannane. After singing and dancing all sat with Amma for a few minutes in meditation. 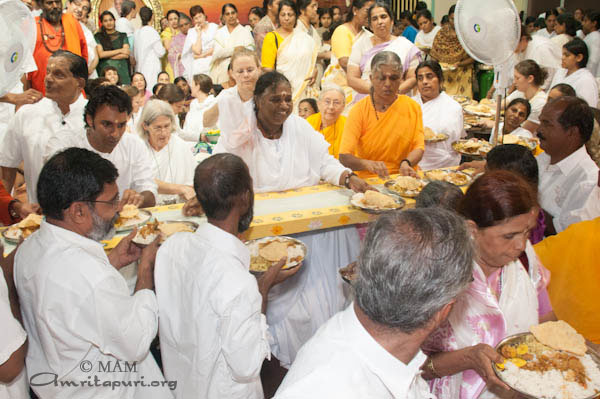 After the meditation, Amma gave darshan for a bit more than one hour, allowing the Ona-Sadhya to be brought to the stage and ready to be served.  Big heaps of plates were brought to both sides of the stage, as well as several large pots containing all the different items making up the prasad lunch. Using both her hands, Amma was sliding the plates into the hands of the devotees coming up the ramp from both sides. Alert and fully focused on the faces of all coming up to her, she acknowledged each one’s presence with a gentle smile, or a look, or a gesture or a word.  The plates passing continued for over 2 hours, until everyone, including all the ashram residents were served.

While food was being served, the hall, was full of people enjoying their Onam lunch.  A small army of volunteers were directing traffic, allowing groups of people in turns to sit on the tables and chairs and enjoy their sumptuous Onam meal, while others with buckets filled with extra rice and curry made sure that everyone had as much as they wanted. Smiles and joy were on every face, as “Happy Onam” greetings were shared with cheerfulness. 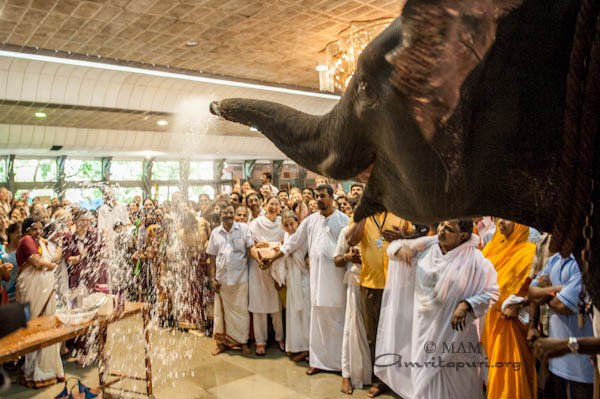 As Amma was finishing the distribution of Prasad to all, Lakshmi, the young female elephant of the ashram was brought to the side of the hall. Amma reached to Lashmi, tapped her and caressed her trunk lovingly, while exchanging words with the mahout, inquiring about Lakshmi’s well being. For the next 10 minutes or so, Amma fed Lakshmi handfuls of paysam balls, banana chips, jaggary sweets, papadam, rice and curry. Lakshmi enjoyed every single feeding. Amma would lift her hand up, waive the food and place it gently deep into Lakshmi’s mouth who would answer with a happy swing of the trunk. Full of compassion and playfulness, Amma would hide handfuls of prasad behind her back, as Lakshmi, indulging in the play, would bring her trunk behind Amma’s back searching for the special treat. At the end, a big bucket of water was brought forward, as the giggling devotees standing in front of Lakshmi while pushing backwards. They knew what was to come. After drinking some, Laksmi filled her trunk with water and splashed it towards the joyfully screaming crowds in front of her.

It was way past 3pm, when Amma left to her room, leaving thousands of happy human hearts and a one special elephant heart relishing on what they had received and enjoyed.
Amma then returned to the hall for bhajans at 6.30pm. After the bhajans Amma came to the hall for the final time to enjoy the cultural performances. All groups participated: little children, youth, adult women, brahmacharis… Indians and westerners… all had something to offer with happy songs, colors, love and inspiration.

It was close to 11pm when the performances ended, but Amma wanted to sing one more bhajan. Amma led everyone in singing Bandalo climaxing with fervent “Mata Rani Ki’s” and “Jay’s”.
Thus concluded a memorable Onam at Amritapuri. A day to remember and cherish! Amma’s joy and generosity offered to all in abundance!