‘Jungle of Light’ is constructed out of traditional Indian materials like bamboo, sari-fabric and clay. It includes a forest and spinning mirrors, which create arcs of light that build a bridge connecting past, present and future. “The reflections of the mirrors are like symbols of our souls. We catch glimpses of our soul but we can never perceive the total picture because it is beyond our understanding,” explains Rebecca Horn. 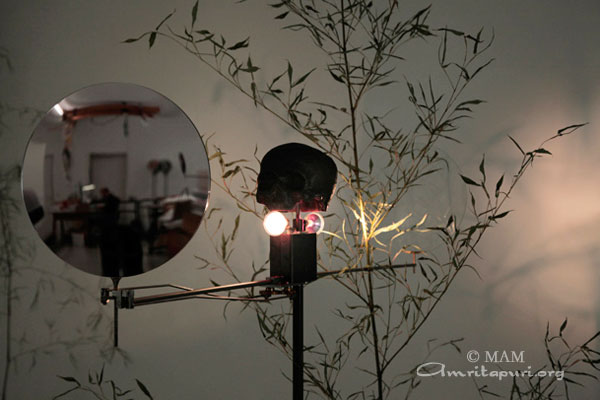 Culture Minister Kumari Selja opened Rebecca Horn’s exhibition last week. She commended the exhibition, proclaiming it as another landmark in the special relationship between India and Germany. The exhibition is part of the “Germany and India 2011-2012: Infinite Opportunities” initiative and is a joint effort of the Ministry of Culture, the German Institute for Foreign Cultural Relations, the Goethe-Institute and the gallery.

Rebecca Horn is regarded as one of the most versatile and creative artists in the whole of Europe. The high point of her career so far has been the 1994 retrospective at the Guggenheim Museum of New York, which was then exhibited at the New National Gallery in Berlin, the TATE Gallery in London and the Kunsthalle in Vienna.

Last year the artist met Amma at M.A. Center, Germany. “Amma is like a Sun,” Rebecca Horn remarked spontaneously when she first saw her.  “Meeting her was very intense, she hugged me again and again and I was very moved.” 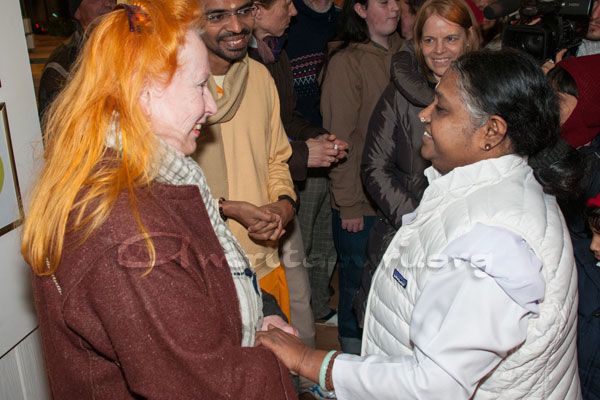 After the meeting, Rebecca Horn was so inspired by Amma that she wanted to create a special piece for display in India and dedicate it to Amma. The installation “Jungle of Light” is the central piece of the exhibition and is based on the artist’s experience of meeting Amma.  The artist has also written a poem “Jungle of Light” further describing her experience.

The exhibition was opened last week and runs until May 20th. “Jungle of Light” will be displayed along with previous installations and films and videos for which Rebecca Horn is also famous for at National Gallery of Modern Art, Jaipur House, India Gate, New Delhi.