At the astrologically specified time, to the sound of bells and a conch, Mother walks into the heart of the new Brahmasthanam temple. In there we can see a rather empty place—a small square room containing only a black square hollow at its centre. 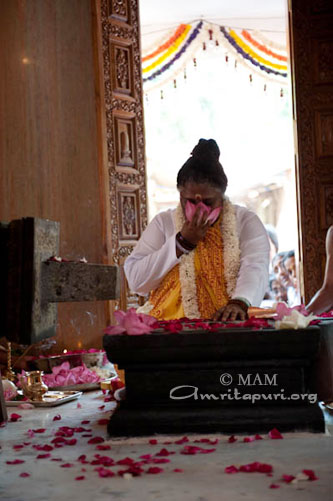 The murthi (idol) is still outside. Mother designed this unique murthi for Her temples. It is a graphic representation of one of Her primary teachings: that God may have many different faces, but underneath is truly only One.

This one piece of black stone is the substratum for its four different sides—one showing Devi, the Divine Mother; one depicting elephant-faced Ganesh, remover of obstacles; another symbolizing Lord Siva, and the last showing a cobra’s raised hood for Rahu.

The room inside the temple loses its vacuous feeling when Amma steps inside. She greets the people gathered outside seeming to say, “Come, be here with me.” She then takes Her seat on the floor, facing the hollow base.
In Her hands She holds a glittering gold leaf on which is drawn the Sri Yantra. She gazes upon it for some time, then gently rolls it up, anoints it, and holds it to Her forehead before depositing it in the hollow of the base.

One by one She places pink lotuses on the four corners of the square base, and also midway along the sides. The last lotus, fully opened, She clasps to Her Heart, and for a long time, motionless, She meditates.

Then, as the Panchavadyam musicians play ever more fervently and a blown conch rends the air, a group of brahmacharis emerges into the courtyard. They are bearing the new stone murthi. They circle the temple to enter the front (east) door, the same one through which Amma passed before them.

Labouring, backs bent, arms stretching down with the immense weight, they carry the image up the steps and into the inner sanctum, where they lay it on a small bench near the hollow base.

They leave, the doors close, and the waiting begins. “Om Siva Shaktyaikya Rupinyai Namaha” the crowd chants on and on, the musicians play on, the bells ring continuously. Suddenly the temple doors open and there stands Amma— She comes to each door, again engaging the devotees in what She is about to do.

The doors close. The chanting continues, and the bells and the conches and the music—this time for much longer.

What is going on inside, the people can see only in their hearts, but most know that at this stage Amma is engaged in the almost indescribably holy: She is transferring Her vital force, Her divine energy, to this piece of carved rock, subtly changing it from a mere stone to a true murthi, a representation and real presence of the Divine. A temple thus installed by a mahatma will retain this blessed state forever, becoming a truly holy place for all who come seeking God. At last, the temple doors open, and this time one does not see emptiness: there, on its base, stands the black murthi, draped in white garlands. Amma waves an arati lamp, circling the murthi. Her arati finished, She performs abhishekha. Pot after pot of sanctified waters She raises above Her Head; holding each there, still, with eyes closed, She meditates; and then gracefully lowers each over the waist-high murthi. Upturning each, She lets the water splash over the murthi and down to the floor, whence it flows into the mouth of a spout. Outside eager devotees reach out cupped hands beneath the spout. When this ritual bathing of the image is finished, four sannyasis, now standing in the inner sanctum with Amma, perform arati simultaneously, one to each side of the murthi.

By the way they wave the flames and the way they offer petals at the foot of the image and at Amma’s feet, they show their reverence for Amma as one who not only breathes life into this piece of stone but whose very life itself is the presence of God. The arati is finished, and Amma once more meditates, standing somewhat back away from the murthi, almost in the corner, as if to say: “Now focus your attention on the murthi and what it is meant to remind you of; My energy is there.” To once more acknowledge, engage and bless Her thousands of children who are gathered outside the temple, Amma proceeds again to each of the four doors, this time showering flower petals out towards the devotees.

This offering of petals is done to God, and images of God; when Amma does it in this way, She is recognizing the Divinity in all beings. Amma then leaves the temple.

The pratishta is finished. But in a satsang a few hours after She had consecrated the temple, Amma said “Pratishta means consecrating – not consecrating an idol in a temple, but seeing what is covering the divinity within us. The real pratishta of our deity must take place within our heart.”
Mother’s message before, during, and after any pratishta ceremony is always the same: “Divinity is a palpable reality for us to discover, and not within the four walls of a temple.”