Dr. R. Chidambaram, the Principal Scientific Advisor to the Government of India met with Amma during his visit to Amrita University for the International Conference on Wireless Technologies for Humanitarian Relief (ACWR2011) at Amritapuri on 19 December 2011. Along with Dr. Chidambaram, his colleague S. Chatterjee and Dr M.H. Mehta, Chairman of the National Bioshield Society also participated in the discussion. 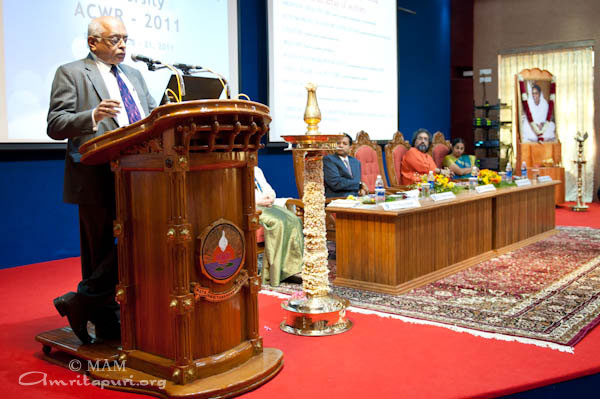 Dr. Chidambaram, who is a renowned nuclear scientist and metallurgist, mentioned to Amma that his focus at the conference was to combine wired and wireless networks. He felt that Amrita University’s haptic technologies project had a lot of potential. Dr. Chidambaram was very much impressed by the landslide detection system developed by Amrita University and requested Amma to bring this technology to the Himalayan region of Uttarkashi where landslides are a regular phenomena. Amrita University had designed, built and deployed a real-time landslide warning system in the hills of Idukki district of Kerala and was even able to issue warnings on time. 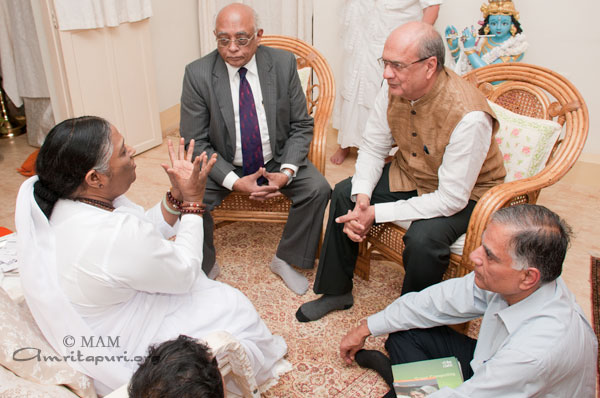 Amma said that this system is designed to work in the Kerala mountains. She started by talking about the necessity of simulations before actual deployment and how mini-models need to be implemented for testing. Amma went on to talk about ‘pore pressure’ due to a large quantity of wide-spread rainfall on a hill. She outlined that each hill or mountain may have different types of soil every 10-20 feet and that this variety may yield more questions to study. She said that we need to consider the weather conditions and the soil/mountain quality before deploying in Northern regions. Upon hearing Amma pointing out these scientific matters in such detail, Dr. Chidambaram was indeed surprised.

Amma then began talking about mobile communication towers, “Because of the radiation of huge cell phone towers many small birds are not able to build nests and are disappearing. If we produce devices that are smaller in size and keep them in individual houses, connected to one another, such problems can be solved.” 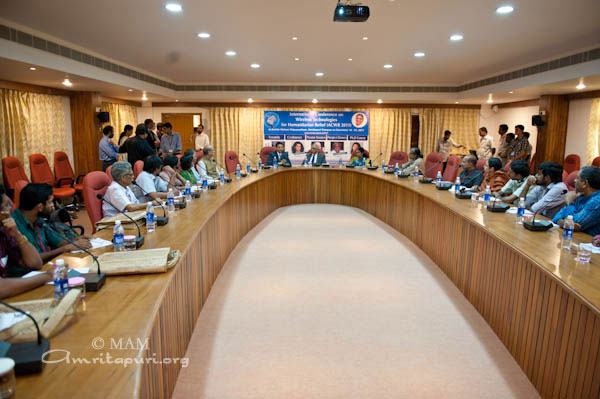 Amma also mentioned that her motivation to pursue research at Amrita University originated from her seeing the suffering around – poverty, starvation, sickness, environmental pollution and contamination. She stated that multinational companies abroad give importance to research, but not so in India. Now the situation is changing. Amma also mentioned that other countries must grow and become happy. Another problem of India is the so-called ‘brain drain’. To this, Dr. Chidambaram replied by telling Amma that she had attracted a lot of talented people from abroad, which even the government finds hard to do.

Amma continued saying that the level of respect society shows for scientists should increase. When science is respected the motivation to serve and find cures for cancer and other diseases will automatically arise within, while the desire to make quick money will decrease.

Amma said “Nature is God’s form. In creation, nothing is insignificant. Everything is important. Creation and creator are not two, but one. The ocean and its waves are not different but the same. Gold and gold ornaments are the same. Clay and clay pots are of the same essence. That is what science tells us too. Everything (matter) is energy” Amma talked about seva (selfless service), science and education and how they benefit both the individual and society as a whole. She also mentioned about the need of quality education and the essence of values.

As the meeting was coming to an end, Amma asked how the attendees became interested in spirituality. Dr. Chidambaram talked of how science has its limits. He said that for any scientific law questions like ‘Why that law?’ ‘Will that law stand true in the future?’ still cannot be explained. The laws that connect living and non-living matter and determine the interaction between atoms are still a puzzle. Parabrahmam (Consciousness that pervades all matter) could be the explanation, he added.

Science can explain ‘how’ things are happening, but not ‘why’ they are happening. That’s where one turns to spirituality for the answers.
–Sakshi