Dr. Ashok Kolaskar said that he and the people of Pune are proud to have such an institution for the first time in Maharashtra which provides not only high-technology which has been the part and parcel of ones life but also love and faith which are now slowly vanishing from the world. In his speech he said that in a couple of years human clones, humanoids, might be a reality. But the quality of social interaction is going down and moral values are losing out to the market culture. He said that institutions like AICT will prove to be very crucial in fulfilling this need of society. Dr. Vijay P. Bhatkar gave an example of how sage Vishwamitra had created a new world through his tapas. In the same manner computers are creating a new Digital Reality World altogether. But even though there are many languages like C, Cobol, Java etc. the language always found missing is the language of Love. This is what Amma pours into computers through Her computer institutes. AICT, indeed as Sri. Krishnan concluded in his thanksgiving speech will indeed prove to be the “Amrita Institute of Character Transformation.

On the last day of program, a devotee adorned Amma in Krishna costumes at the end of the day’s darshan. Amma/Krishna took butter from the pots offered to her, and drank buttermilk from the pot. 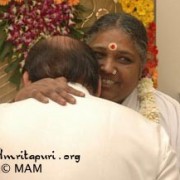