Inauguration of AICT, Hospital, Handing over the keys of Amritakuteeram

During Amma’s visit to Mysore in March 2001, Sri S.M. Krishna, Chief Minister of Karnataka visited the Mysore ashram and had the honor to inaugurate the Amrita Kripa Hospital Project, the AICT Mysore, and handed over the keys to the beneficiaries of Amritakuteeram Project. The Chief Minister said that the service projects initiated by Amma reflect Her greatness, for Amma is not motivated by any political ambitions neither a desire to get more votes nor become a Chief Minister nor the Prime Minister or the President but these activities arise out of selfless love and compassion. He called Amma the very incarnation of simplicity.

He felt that the whole society has a dream of happy living and no government can fulfill this by itself. Only service institutions like Mata Amritanandamayi Math can help realize the bright future that we all desire. The Chief Minister assured full cooperation for the social service activities of the Mata Amritanandamayi Math. He was all praise for the social, educational and health service activities of the ashram. He felt that Amma has transcended the limitations of language, caste and creed. The very fact that her activities are not limited to Kerala alone but spread all over the country shows that Amma is the real mother of all. The Chief Minister referred to Amma’s speech at the UN and said that Amma’s participation has made every Indian feel proud. 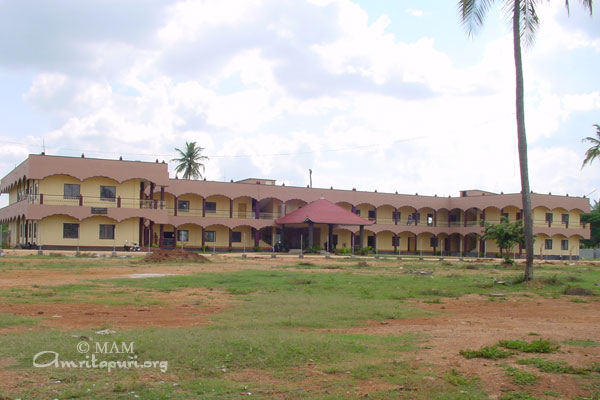 He added that Amma is shouldering the burden of the State Government in the development of the downtrodden and the poor. He said that the people of India should be grateful to Mother for operating all over the Country, and not just in Kerala. He said that the Karnataka government is committed to encourage and extend all support to Amma and the charitable activities initiated by Her.

When the first woman approached, there was a certain stiffness of formality, but by the time of the second Amma could no longer resist reaching out and hugging the woman who clasped her new key to her bosom. How could Amma, who is always there to wipe tears from Her children’s eyes, not reach out? For the grateful woman was wiping tears from her own eyes. We can be sure they were not tears of grief.

He said that those who are suffering from poverty and starvation don’t want religion. Realising their need Amma has initiated many service projects which aim to fulfill the basic needs of such people. He said that this was true spirituality.