The day before Amma’s 49th birthday celebrations began, Amma talked some with the ashramites. With all the birthday excitement in the air, it seemed She wanted to remind all assembled that, in truth, we were never born, nor will we ever die.  “The day that the thought that you were born dies is the real birthday,” said Amma. The day the Karthika Star rose in the Malayalam month of Kanni, was just the day Amma chose to incarnate on this planet, not Her birthday. 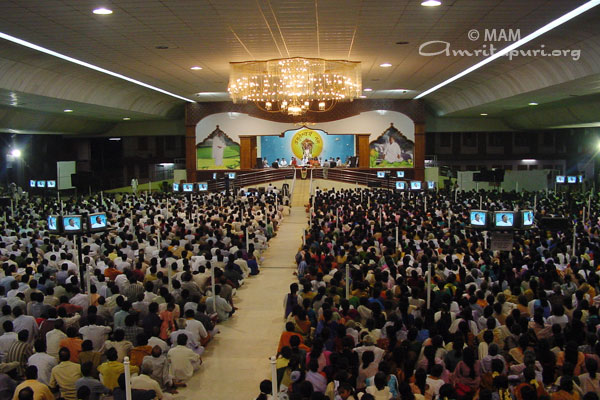 That said, more than 30,000 devotees came to Amritapuri to celebrate the anniversary of Amma’s incarnation on earth. Surely, this figure would have been higher had their not been an all-India strike on September 26th in response to the terrorist attack on a Swami Narayan temple in Gujarat. Rightly so, the atrocity, which left more than 25 Hindus dead, dampened the celebrations in Amritapuri, and Amma cancelled all but one of the scheduled cultural programmes.

That night, Swamiji conveyed Amma’s feelings about the tragedy in Gujarat. “Amma feels that sorrow, pain and fear are pervading the atmosphere. Now, not celebrations but action with awareness is what is needed. In the name of celebrations, japa, meditation, singing the glory of the Lord, prayer and selfless service is what is happening in the ashram.

“Those who love darkness cannot bear the light of spiritual consciousness. Ravana, Kamsa and Duryodhana were all like that. But they never succeeded in life. Like that, the darkness will disappear; light will come. Till then, wait patiently, work with the strength of penance and perseverance. This is the time to act, transcending the thoughts of caste and religion. Like the pearls threaded on the string of love, those who desire inner and outer peace should come together as a single entity.”

The evening’s one cultural programme was a dance by film star Vineet. Amma came to the stage to watch his performance. Before She returned to the room, Amma also paid a visit to the kitchen where She helped cutting a few vegetables.