Radiating divine bliss and peace to all humanity, the birthday celebrations of Mata Amritanandamayi Devi were held in the Amritapuri Ashram on 6 October, 2001, in a festive atmosphere of fervent devotion, exuberant joy and deep gratitude. The beautifully decorated Ashram was filled to overflowing with devotees from around the world, who had come, full of enthusiasm, to join in the celebrations honouring their most beloved Guru and Mother, Amma. 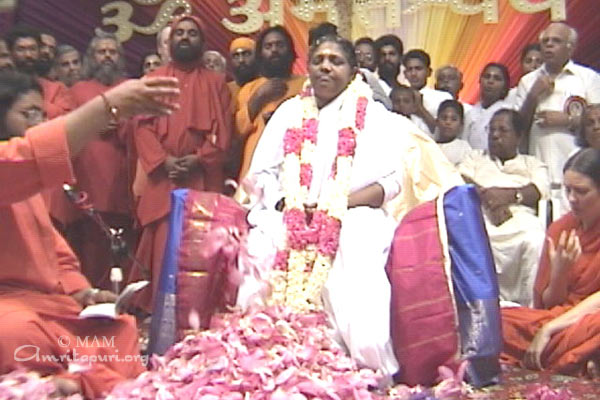 The day began with congregational Sahasranama chanting followed by a talk given by Swami Amritaswarupananda. He said, “A Divine Incarnation is born to set an example to humanity, to be one among them, to partake of their joys and sufferings, and to teach them great lessons through the example of their own life. And that is what Amma is doing in Her everyday life. She is ever ready to share our griefs along with our joys. Surely, generations after generations will be inspired, purified and motivated by Her Divine Love.”

At around 9:00 am, Amma was escorted to the dais as devotees along the way offered flowers at Her holy feet. The atmosphere reverberated with the vibrant sound of “OM Amriteshwaryai Namaha!” being chanted by the devotees, who filled the spacious auditorium to overflowing. Amma’s radiant smile lit up all hearts, while every soul seemed to blossom in the sun of Her presence.

The most auspicious event of the celebrations, the pada puja, was then performed by Swami Amritaswarupananda Puri, assisted by Swamini Krishnamrita Prana, as Vedic mantras and intense devotion filled the air. The 108 Names of Amma followed, all devotees joining in the chanting. The people of Parayakadavu village then presented a ceremonial offering, as a token of their love and gratitude to the Divine Mother who has incarnated in their midst.

Amma then showered Her divine wisdom and guidance upon the world through Her benedictory address. She lamented, in Her divine message, the present state of the world, marked by violence and destruction, and gave a rousing call to shun the path of hatred and create a new world of love and harmony. Amma made a fervent plea for the regeneration of spiritual culture and the uplift of women. She delineated the path to a life of bliss and contentment, and revealed Her deep commitment to the suffering humanity. She said, “The only birthday gift Amma wishes for is a tear drop of compassion for the suffering, a consoling word and a helping hand offered to the poor and distressed.”

Amma’s talk, replete with vivid stories and illustrations, delivered in Her usual charming style, appeared to move the devotees deeply; towards the end of the talk it seemed as if a vast wave of silence had washed over the crowd. Finally, Amma led the devotees in meditation and prayers for the peace and the welfare of all beings everywhere. 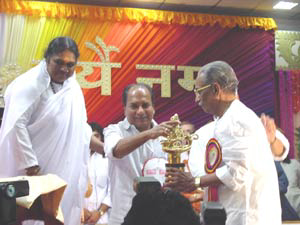 Sri A.K. Antony inaugurated the fifth phase of the Amrita Kuteeram project, a magnificent scheme of Amma’s ashram to construct 25,000 houses for the homeless poor in the country and handed over the keys to the representatives of the beneficiaries.

Sri O. Rajagopal then offered the Ponnada and dakshina to the renowned artist Nambootiri, who had designed the beautiful sculpture presented with the Amritakeerti Puraskar award.

Sri Jual Oraam then inaugurated the Amritaranya Jivanam Project, a new scheme created by the M.A. Math for the all-round welfare of the Tribal people throughout India. He then presented prizes to two meritorious Adivasi students from Amma’s school in Parippally, Sri Kumar and Sri Nanchan K.V..

Bhajan cassettes sung by Amma and Her disciples were released by Smt. Urmila Singh, Minister for Tribal Welfare, Madhya Pradesh.

Amrita Resmi, a compilation of poems dedicated to the Divine Mother, by Swami Turiyamritananda, was released by Kavalam Narayan Panicker.