New Year’s Eve was celebrated in Amritapuri. Remnants of Cyclone Thane had drenched the Ashram with heavy rains from early morning through midday. But by dinner, the rains had subsided.

Amma arrived for darshan at 11am. At about 9pm, the cultural performances began while Amma was still giving darshan on stage. First was a wonderful Indian dance by two young girls of about 8 yrs old. They were followed by a French boy who was juggling an hour-glass shaped object on a string tied to two sticks held in each hand. Indian resident children next put on a play based on Amma’s teachings. Amrita University students came next, entertaining the crowd with bhajans. The last performance was a colorful dance performed by women from around the world. 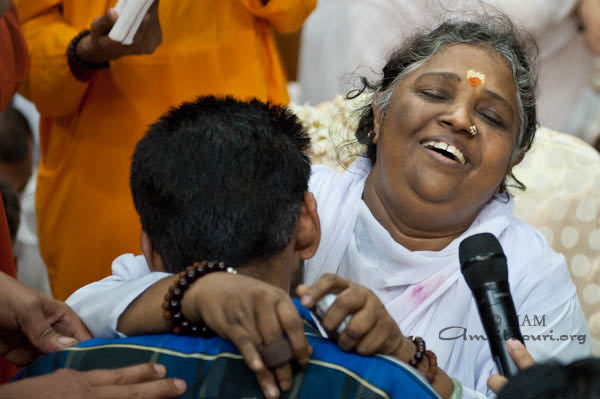 There was a broadcast of Amma’s New Year’s message followed by a translation. Amma said “May our lives and the lives of all beings be pervaded with goodness. This is Amma’s prayer on this occasion. May the divine power to effect positive change – both in ourselves and in the world – be awoken in Amma’s children. Amma’s prayer is that this New Year may lead to the birth of a new individual and a new society.” Read New Year’s message

After the talk, Amma asked everyone to chant Lokah Samastah Sukinau Bhavantu 18 times. Amma then blessed full bowls of Hershey Kisses and told everyone to take just one. As darshan appeared to be ending, the musicians who had been playing for the performances started to play Bara Gopala Bala. Amma took the microphone and began singing. Within moments, small circles of dancers had formed at the base of the stage: boys on the left, girls on the right. Jumping up and down, hands waiving in the air, their ecstatic joy was catching. Throughout the hall, more people began dancing, inspired by Amma’s voice and the increasing rhythm.  This continued for some time until the music eventually subsided. Then, much to everyone’s joy, Amma started singing Mata Rani. Within an instant, those who were still in their seats rose to their feet and joined in the dance. On and on it went with the hall erupting in Ki Jai!!!s over and over again until the roof was nearly blown off the hall.  So much joy was there. 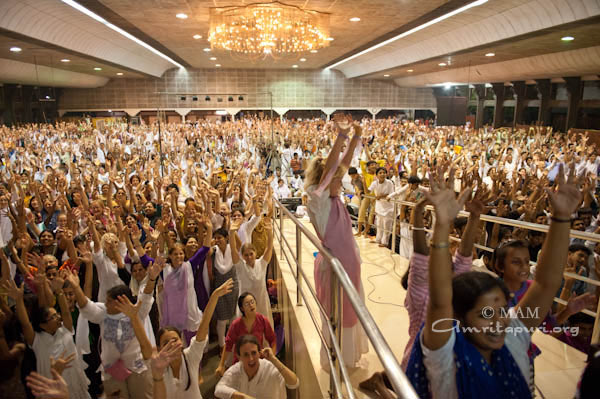 After the Ki Jai!!!s subsided, Amma asked everyone to pray for peace and happiness in the world.  Amma began singing Kushiyom Ki Bahar – the English translation appearing on the big screens in the hall. What had been joy and elation turned to solemnity as everyone repeated ‘Lokah Samastah Sukinau Bhavantu’ at the end. Silence descended over the crowd. Everyone was left to reflect on Amma’s New Year’s message, the sweet taste of chocolate, and the wish for all beings in all worlds to be happy.