Amma’s annual visit to the south of France once again brought her to the Zenith Omega hall in Toulon. 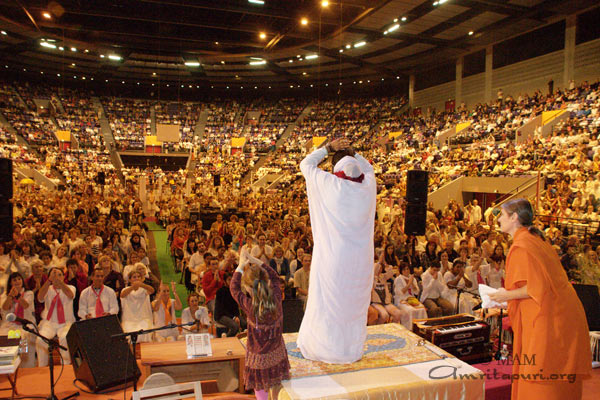 Huge crowds filled the venue for the three days for programs there.

Her visit was given extensive media coverage, including the newspaper “Var-matin” with a front-page article titled “Amma: l’amour, toujours!” which translates to “Amma: Love, Forever!”

Sister Marie Samuel, head of a Catholic nun monastery, who came for Amma’s darshan for share her views on Amma and she said: “A saint, an Indian saint, a high saint, truly. She is close to God but also close to her human brothers in pain and sorrow. She is authentic. Yesterday, I saw the film (Embracing the world) in the hall, I had tears in my eyes, she didn’t hesitate to go to Japan, near the sea, despite the contamination. She is working in all fields and this is unique in the World. Mother Teresa gave so much in India, but I think that Amma is doing even more.”

Some others spoke of how Amma and her teachings had inspired them during times of crisis. One gentleman said:”In June 2010, a devastating flood hit the town of Draguignan in France. We gathered a group of volunteers to go and help the people who were in need. We can see that because of Amma, because of the link that she has created, we can still harbor a feeling of solidarity, offer our help and time to others. Which unfortunately is becoming a value that is disappearing in today’s society.”

Amma’s message of love and hope continue to inspire the people around the world in profound ways.