Under the guidance of Br. Dayamrita Chaitanya, forty youth came together for the second annual AYUDH East Coast Youth Exchange for the theme ‘Reaching New Heights’. The zealous youth from across the United States and Canada gathered at the picturesque ashram to share ideas, pray together, and join hands in performing selfless service. 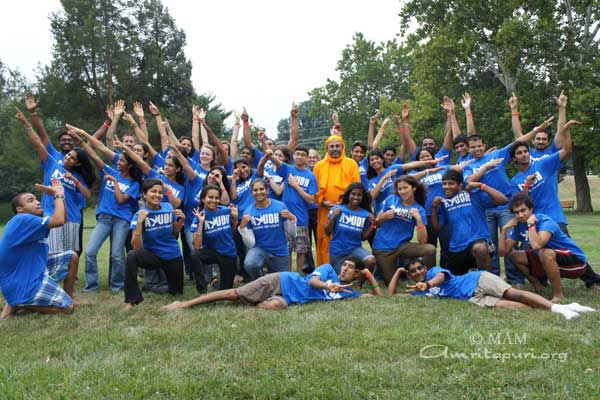 The participants arose early the first morning to cook and serve lunch for the Bethesda Cares shelter in Maryland. Apart from the joy of partaking in teamwork to churn out a meal within an hour, some participants remarked that it was their first time serving at a shelter, and it was a transformative experience. “It was eye-opening to see firsthand how others appreciated so dearly what many of us take for granted every day,” commented Amit Sookdeo. 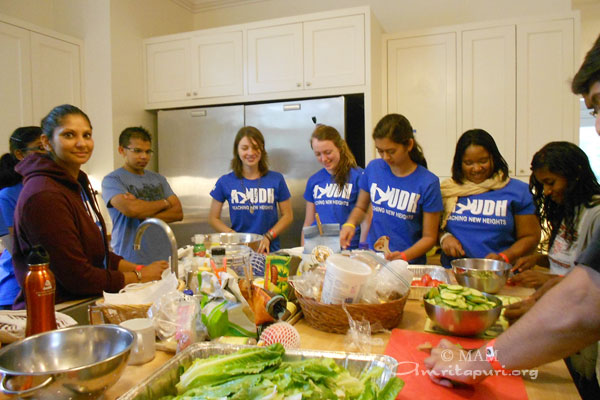 In a question-and-answer session with Br. Dayamrita, participants learned how to handle stress, especially with demanding academic curricula.

One of the retreat’s highlights was the screening of Bag-It, a documentary highlighting the gross waste of plastic and the subsequent effects on our ecosystems. Inspired by AYUDH members’ service projects around the world, the Amrita University students’ efforts to clean roadside trash in India, and Amma’s message that “Nature is our Mother,” the participants each pledged to make one change in their lives. The pledges ranged from carrying reusable bags to the grocery store to growing plants in one’s backyard, stopping the personal purchase of plastic water bottles to serving at a homeless shelter twice a month, and even recommending a composting system for one’s college dining hall to wasting less water on a daily basis.

“Even though we pledged to do simple things like grow plants in our house or be more conscious about the environment, these little actions will add up in the end and we will see genuine change,” said Jaya Vallis.

The rain cleared up the evening, as AYUDH members swam in the Ashram’s pool, played tennis and basketball, enjoyed a slip-and-slide, and roasted marshmallows in a bonfire.

The following day, participants were treated to a lively bhajan class on the song “Akhilandeshwari Ambe,” involving a conglomeration of instruments, music styles, a rap, and singing variations between boys and girls. AYUDH had a satsang with Swami Amritaswarupananda via webcast from Amritapuri, who gave the camp members a guide to reach new heights and embrace what he coined the Law of Grace. He also spoke of how love is a product of Amma’s grace, the elimination of emotional distress, and the three C’s: Calmness, Cheerfulness, and Confidence. 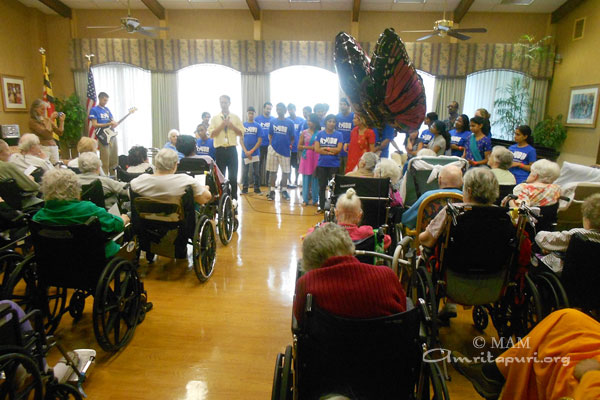 The final event of the retreat was one that had many participants fighting back tears. AYUDH had the opportunity to do a one-hour performance before the elderly residents of the Potomac Valley Nursing and Wellness Center. Titled “East Meets West,” the performance had a medley of songs and dances, such as “Leaving on a Jet Plane” by Hari Pancha, “Kal Ho Na Ho” by Amritesh Thoppil, “My Favorite Things” on saxophone by Karthik Krishnan, and a Wushu martial arts demonstration by Poorna Sreekumar.

Several AYUDH members from DC choreographed and performed a fusion dance with raas, bhangra, Bollywood, and hip-hop, followed by an interactive “Lean on Me” led by Tom Marino for which all of AYUDH and many of the Center’s residents sang along. Throughout the entire set, several residents in the front row displayed their enthusiasm by clapping and laughing aloud at the jokes. The most memorable part was a spontaneous, heartwarming rendition of “Amazing Grace” by Fran, a care home resident who sung in her church choir from the age of two.

Said Tom Marino, “This lesson was made tangible at our visit to the nursing home: At first I was nervous and doubtful. Through Grace, the three C’s gradually replaced my distress. The result was love, which had saturated the entire hall and is still present in my heart.” After spending some time with the residents who expressed their appreciation for the performance and after promising to come back soon, AYUDH members wheeled residents back to their rooms and returned to the DC Ashram, invigorated and touched by the bliss received in performing seva.