At 4.50 am, on the Krishna Janmashtami day, the bhajan hall was echoing with the mantras of Lalita Sahasranama. The adjacent Kalari, filled with white smoke from the Homa Kunda. The celebrations of Lord Krishna’s birth had begun in the charged atmosphere of Amritapuri ashram. 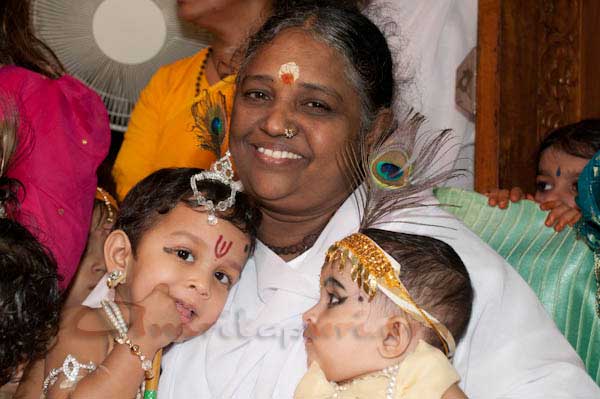 To celebrate Krishna Jayanti with Amma, devotees poured into Amritapuri from the different corners of India and abroad. Because it was Krishna Jayanti, there was a full day of activities planned: Amma came and gave Darshan to her children, till about 3.00 pm, then the Nagara Sankirtan procession started at 3.00, ending at about 4.00 pm, with hundreds of devotees, ashramites and dozens of young Krishnas and Radhas all dressed up to participate in the procession chanting with fervor the divine names of the Lord.

The open ground on the west side of the ashram was all set to host the anticipated “Uriyadi” (the traditional cowherds’ game of breaking curd-pots, reminiscent of Krishna’s childhood pranks of stealing butter and curd stored in pots hung from the ceilings of houses). Just as Amma came out heavy rain began to fall, but Amma wouldn’t let that dampen the spirit of the gathering, and spontaneously shifted the venue to the bhajan hall, with the main stage serving as the venue of Uriyadi.

Amma sat on the stage was surrounded by countless little Krishnas with as many of as possible trying to occupying Amma’s lap.

In between Amma’s concerned voice could be heard asking everyone to dry their heads from the rain, so they wouldn’t catch cold! And of course there was laughter all around when an infant Krishna in Amma’s arms, suddenly remembered its mother and started crying loudly. As the kids finished the “first stage” Uriyadi, and the rain had stopped, and Amma asked everyone to go back to the open grounds which was now totally muddy. No one seemed to care as they stood in the mud, in puddles, on the available chairs and tables and some even in the trees; their eyes all riveted on Amma. The grounds had become Vrindavan, full of fun, excitement, and enthusiastic bhajans all lead by Amma. 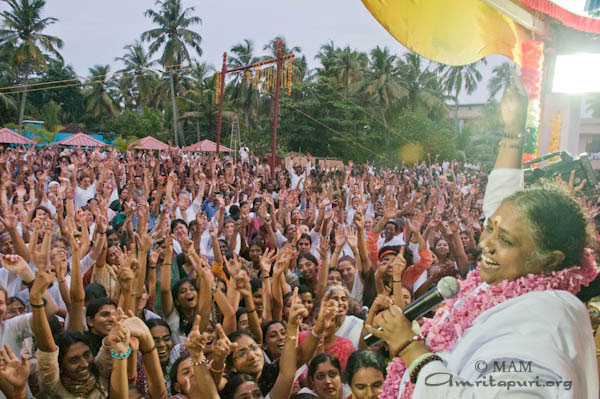 After the Uriyadi, Amma, was back again for the regular evening bhajans which began with, “Hare Krishna shaure, vibho vishva murte, mukunda murare, yashoda ke pyare” in praise of child Krishna. But the final act was yet to come! At about 11.30 at night, for the fourth time in the day, Amma, returned to the stage where the Bala Gopala Puja and the reading of the Srimad Bhagavatam were taking place.
At midnight, exactly at the time of Krishna’s birth, Amma delivered her message on the life and values of Krishna. Amma narrated the story of a Gopi named Neeraja’s who exemplified Krishna’s message, “When compassion takes birth in our heart, Sri Krishna is born within us.” 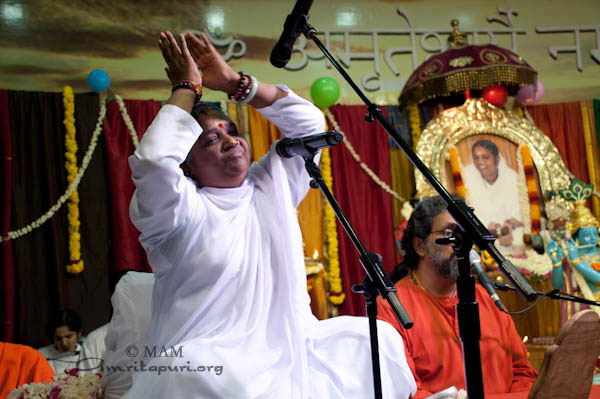 Then as she does for every Krishna Jayanti, in a very blissful mood Amma sang several Krishna bhajans and finally asked all the devotees to stand up, put aside all their inhibitions and worries, and forget everything, and dance in bliss and ecstasy. Amma then lead the bhajan ‘Hari Bol Hari Bol Hari Hari Bol,’ while the whole hall erupted in dance.

Then Amma distributed payasam to all the devotees. One could hear Amma repeatedly asking for devotees who hadn’t received the payasam to raise their hands. Only after making sure that every one of her children had received the payasam did she go back to her room. It was past 1.30am and another memorable moments were archived in the hearts of devotees.