Blog - Latest News
You are here: Home / Around Amma 2002 / Amma received the Gandhi-King Award for Non-violence

In 2002, Amma was presented with the Gandhi-King Award for Non-violence, given in recognition of Her lifelong work in furthering the principles of non-violence. The Gandhi-King Award is a joint initiative of the Millennium World Peace Summit of Religious and Spiritual Leaders and the World Movement for Non-Violence. During the event at the UN headquarters in Geneva, she gave the keynote address at the Global Peace Initiative of Women and Religious Leaders. 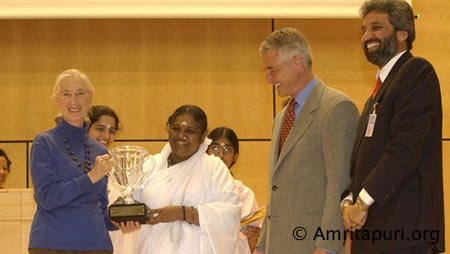 In what conference organiser Dena Merriam called “the most important ceremony of this event,” Amma was presented with the 2002 Gandhi-King Award for Non-Violence at the United Nations General Assembly Hall (Palais Des Nations) in Geneva in recognition of Her lifelong work in furthering the principles of non-violence. The three previous recipients of the award were Nelson Mandela, Kofi Annan, and the world-renowned primatologist Dr. Jane Goodall. Dr. Goodall presented the award to Amma.

Dr. Goodall, presenting the award to Amma said: “I feel it’s a great honour to share a platform with a woman who is so remarkable, and who is the very embodiment of goodness… She believes that God does not discriminate between the sexes, and I believe that She stands here in front of us, God’s love in a human body.”

Bawa Jain (Secretary-General of both The Millennium World Peace Summit and The World Council of Religions) and His Excellency Mr. Sergio Vleira De Mello, UN High Commissioner for Human Rights were also on stage with Ms. Goodall to bestow this prestigious award.

In her acceptance speech,  {news} Amma praised the work of both Mahatma Gandhi and Dr. Martin Luther King, Jr.: “This award is in the name of two great beings who fearlessly devoted their lives towards the cause of peace, harmony and equality. Amma accepts this award on behalf of all those who pray and work for peace the world over. May this be an inspiration for people everywhere to redouble their efforts in bringing peace to our planet.”

Amma’s keynote address, entitled “Awaken the Universal Motherhood,” {news} addressed gender issues directly and profoundly in the context of spirituality and society as a whole: “No authentic religion belittles or denigrates women. For those who have realized God, there is no difference between male and female. The realized ones have equal vision. If anywhere in the world there exist rules that prevent women from enjoying their rightful freedom, rules that obstruct their progress in society, then those are not God’s commandments, but are born out of the selfishness of men.

“Which eye is more important, the left or the right? Both are equally important. It is the same with the status of men and women in society. Both should be aware of their unique responsibilities, or dharma. Men and women have to support one another. Only in this way can we maintain the harmony of the world. When men and women become powers that complement each other, and move together with co-operation and mutual respect, they will attain perfection.”

Also during the conference, Amma gave interviews to One Voice International, during which She comforted a New York firefighter who was present during the September 11 tragedy, and the Christian Broadcasting Corporation. She also led the prayers for world peace at English Garden Lake Park, located in the heart of Geneva. In Her peace message after the prayers, She said, “What everyone needs is peace. But a majority want to be king. No one wants to be a servant. How can there be peace then? Won’t there only be war and conflict? A true servant is the real king. Isn’t the milk from the black cow, the white cow and the brown cow white? Similarly, the essence in every person is the same. Peace and contentment are the same for everyone. Those who desire them should work together.” 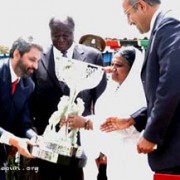 The Awakening of Universal Motherhood 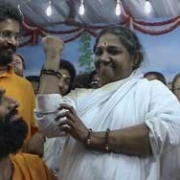 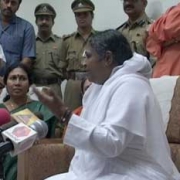 The light in the darkness