Amma left Amritapuri on the evening of the 29th. Nobody knew whether there would be any stops with Amma or we would drive directly to Mangalore. As we were crossing Kodungallur we were told that Amma would be stopping in the Kodungallur school. Travelling with Amma the ashram children have learnt to be ready for any eventuality – the food was pre-packed, the sound system and lights were out in a few minutes.
Everybody assembled on the terrace with Amma shining like the moon in the midst.

In some way these moments with Amma stand out – the proximity with Amma, these intimate moments, a smile, Amma’s throaty laugh, her smiling eyes as She seems to see each and everyone of us, her inspiring words which seem like She is talking to us personally. These seem like the times that bond all of us closer together – the Mother with all of Her children. Amma asked people to narrate incidents where they have reacted to criticism – what they thought then, what they think now. Amma said that if two people come together and they were to introspect and and share their experiences of how they fell short of expected standards that itself would a great satsang.

These moments also came to an end, Amma got up after making all of us laugh, sing, dance and think…
We continued on our way to Mangalore. At five in the morning we took a break for a few hours and then resumed our journey to Mangalore. 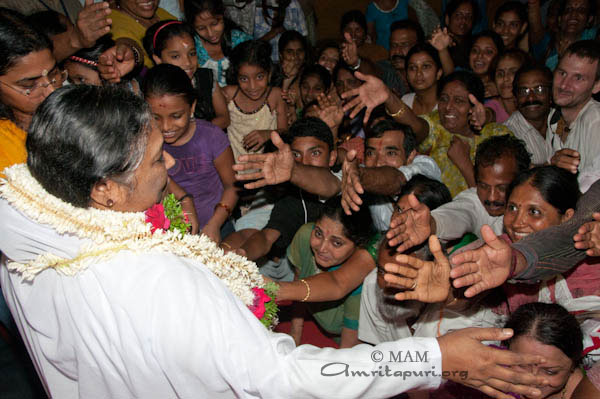 Amma reached Mangalore at about 7.30 pm at night. It is amazing how Amma always has time and energy for her children. She went to the people who had been waiting for her arrival for many hours – reaching out to her children in so many different ways. Touching them, speaking to them, picking up and cuddling a baby and before going to her room telling all those who had gathered there – in Kannada that She would be meeting all of them the next day.

The ashram wore a very festive look – the stage themes very aesthetic and appealing. A large crowd awaited Amma the next day. Amma in her talks laid a lot of stress on family relationships. How in a relationship which lacks love and sacrifice the children are like orphans though they have parents. Amma entreated everybody to re-infuse dharma into their daily lives. There was a special treat for Kannada devotees as Amma herself took the Manasa Puja in fluent Kannada.

The first day also was witness to endowments being given to ten of those who were afflicted by the side-effects of Endosulfan pesticide. As has become a regular occurrence Amma laid lots of stress on Amala Bharatam. 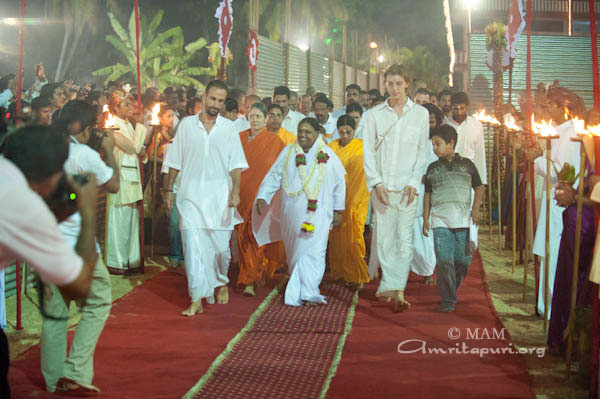 Amrita Nidhi pensions were also distributed. Many politicians as well as leading citizens of Mangalore were present to have Amma’s darshan and lend their support to Amma’s social initiatives.
Sri N Yogesh Bhat, Deputy Speaker, Karnataka State Legislative Assembly in his address said: “The solace and financial help given this special day to the children affected by the toxic chemical Endosulfan, and distribution of pension, and what Amma has set in motion to make clean Mangalore a part of Clean India – Amala Bharatam is an unforgettable event for Mangalore. Surely the [elected] representatives of people, officers of district administration, Municipal Corporation, and whole of this Dakshina Kannada District, will join forces to make the city into ‘Clean Mangalore’ before Amma’s visit here in the coming year.”

It is just so wonderful to see how Amma just has to initiate a project and somehow people all over seem to take up the task. Amma also instructed all of us to go out at 7am and clean up the Central Market Circle as well as the roads leading up to the circle.

At the end of darshan, at the request of the devotees, Amma sang ‘Bandalo Bandalo’ one of the latest Kannada bhajans. Amma asked every one to dance clapping hands with the person by their side. When all cheered – Mata Rani Ki Jai – there were thousands of hands in the air but the voices merged into Amma’s voice, becoming one.