In addition to being home to one of Amma’s Brahmasthanam Temples, Kochi is also home to the Health Sciences campus of Amrita University. Accordingly, many students and staff of Amma’s institutions here enthusiastically play host to Amma’s annual program. Wherever one looks, students and staff can be seen doing seva–serving food, washing plates, distributing drinking water in the hot sun, helping to control the flow of pedestrian traffic, and in activities related to the Amala Bharatam Clean India Campaign–making sure that all waste is appropriately collected, sorted and recycled. 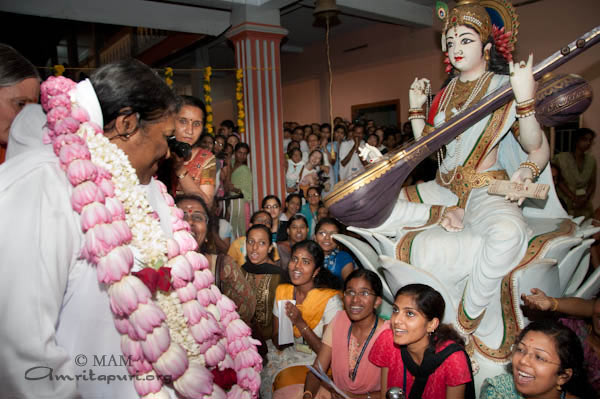 But even before Amma’s programs began, all these sevites and more were present on the grounds of the ashram/campus, waiting to welcome Amma when she arrived on the evening of the 8th. They lined the path on either side from the road all the way through the grounds until school building where Amma stays during the programs. Amma was welcomed on the verandah of the building with a pada puja and garland. The room where she stays is upstairs, and on her way she stopped at the balcony and looked down at the throng of her children below. Though they had been working throughout the day to make arrangements for the program, they were full of energy… shouting and cheering at Amma’s arrival. Many cries of “Mata Rani Ki Jai!” Amma stayed on the balcony for quite a while looking down with the eyes of a proud and loving mother. She asked them if they had eaten and joked with them. Finally she gave her own cries of “Mata Rani Ki Jai!” which were echoed by all those gathered below.

In his welcome address, the Mayor of Kochi reflected: “It is the responsibility of the government to help the common man. However because of the complications of the procedure, it doesn’t reach the expected people in time when they are in need. But Amma’s compassion is reaching out to them. What the government is supposed to do for the society, we can see that is what Amma and her institutions are doing. Amma’s touch has reached all aspects of society. This illustrates Amma’s commitment for the overall development of society. On this occasion I would like to say that the Corporation of Kochi offers its full support for all of Amma’s activities.”

As ever, Amma’s program marked the expansion of her charitable initiatives in the area, and the invited guests participated in the ceremonial distribution. The stage was filled to overflowing with project recipients New Vidyamritam scholarships for children were distributed by the Mayor of Kochi. New enrollees to lifetime pension program Amrita Nidhi received their first pension cheques from the Chief Justice. Members of AmritaSREE Women’s Self-Help Groups received their new subsidized insurance policies from the Life Insurance Corporation of India as part of the Amrita AmritaSREE program. And newly formed Self-help Groups received working capital financial grants–the cheques were handed over by the Rear Admiral.

In her remarks on both days, Amma took time out to remind all those assembled of the hardships currently faced by the people of Japan. Having received reports of her devotees who are doing relief work for the refugees there, Amma explained that even though we are not seeing it in the mainstream news, in fact they have a lot of scarcity of water both for drinking and for bathing, and that they are really suffering–and that in some places, the water contains elevated levels of radiation due to the crisis at the Fukushima Nuclear Plant, and the people are afraid to drink it. Amma then asked for two minutes of prayer for the peace and welfare of the Japanese people, for those who have lost everything and for those who are suffering. 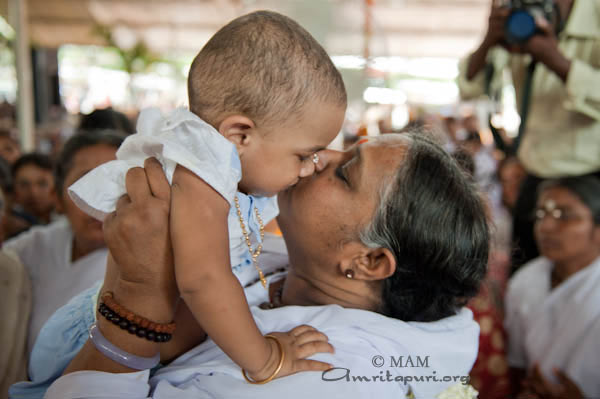 Additionally Amma took care to personally explain the significance of the Amala Bharatam Campaign, reminding everyone to take care of natural resources. She also explained the necessity of using handkerchiefs rather than spitting on the ground. Finally Amma urged all her listeners to revive the practice of growing vegetables at home. Amma said everyone should try to cultivate at least one or two vegetables in their own garden–whether onions, tomatoes, brinjal or lady’s finger.

In addition to their sevas helping to organize the program, the students kept busy in other ways–staging cultural performances and enough bhajan sessions to last through the night on both evenings. Also, inspired by the deep commitment of Amma’s healthcare institutions to serving the poor regardless of their ability to pay, the students organized a blood drive to help raise awareness of the need to donate blood and to advocate for the introduction of free blood transfusions for the poor as a general practice in all medical institutions.

After two days of shimmering heat, Amma’s Sani Puja was followed immediately by a cool and refreshing rain. After a long night of darshan, Amma wrapped up the two days program by joyfully singing two of the year’s new bhajans, Tri Murthigala and Bandalo Bandalo. Along with her voice Amma carried all her children along with her into new heights of joy and bliss.