Amma’s return to Hyderabad was marked by a significant expansion of her ongoing humanitarian projects—shortly after her first evening program began, a seemingly never-ending line of children flowed across the stage, standing in line patiently to receive a hug and a kiss from Amma, and another gift as well—a scholarship check. But in fact the children on the stage were representative of a crowd too massive to accommodate on stage during the evening program; waiting in the wings were more than 1,000 children who would receive checks that night, away from the spotlight but under the loving care and watchful eye of Amma’s volunteers. Each of the children would receive Amma’s darshan during the course of the evening, and they left the grounds of Amma’s ashram clutching their memory of their personal moments with Amma in one hand, and a ticket to a brighter future in the other. 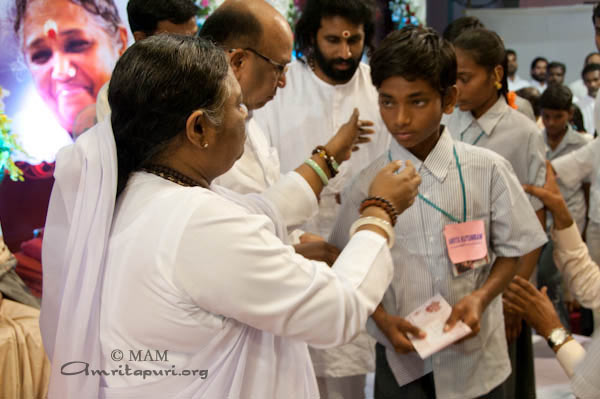 Anita, who is currently studying the 8th standard has been a beneficiary of the Vidyamritam program for the past 3 years. She expressed her gratitude to Amma and told how with her scholarship she can buy books and pay her school fees. She shared how her parents are very poor and without this scholarship would not be able to complete her studies. She hopes one day to become an IAS (India Administrative Services) officer and wants to be able to help people like Amma does.

Mahesh, another recipient of a Vidyamritam scholarship, shared that both his parents died and he lives with his grandparents. He said, “I am very grateful and i am able to study because of this scholarship. I hope Amma is able to help more kids like me.”

Amma also took the occasion to launch the Amala Bharatam Campaign in Hyderabad, and each of the students of Amrita Vidyalayam school here received handkerchiefs which they were encouraged to use instead of spitting on the ground. The students, and the entire assembled crowd, received a personal demonstration from Amma on how she envisions using the handkerchief in a sanitary and sustained fashion, carefully folding it over after use. 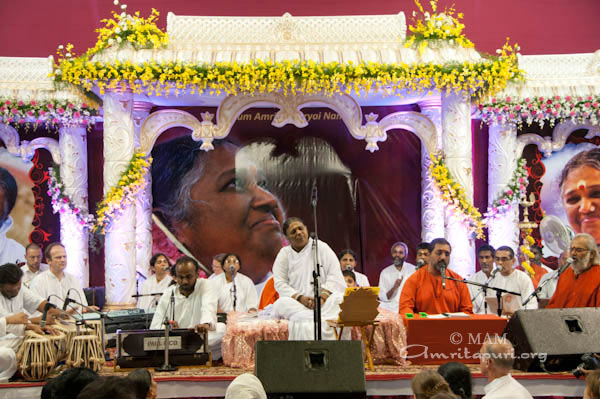 After her satsang, Amma personally led the manasa puja in Telugu, and sang quite a few bhajans in Telugu as well—to the delight of the devotees of Hyderabad.

In the evening, during the darshan, the children of Amrita Vidyalayam put on various cultural performances. In addition, a group of tribal performers from Bhadrachalam staged a koya dance. Also, Sri. Samala Venu, renowned magician and hypnotist, performed some magic tricks to the delight of onlookers. Having dedicated his performance to Amma, he appeared to magically transform a long black shawl into brightly colored shawl bearing all the hues of the rainbow. Mr Venu, said that this represented the same magic trick Amma performs on each person who comes to her, transforming the darkness of their sorrow into a rainbow of peace and bliss.

Also on this occasion, Swami Purnamritanandaji’s book, Unforgettable Memories, was released in Telugu under the name Amrita Smrutulu.

At the end of the last darshan Amma led everyone in a joyous rendition of Devi Devi Devi in Telugu.