The walk had been made before—16 days shy of a year ago. Then and now, the prayers were the same: May the dead find peace… May those who loved them find peace.,, May the whole world be happy. But although the walk Amma led from Amritapuri to Azhikkal today seemed in many ways a flashback to the one immediately following the tsunami, in others it was entirely different, as the road itself was different. 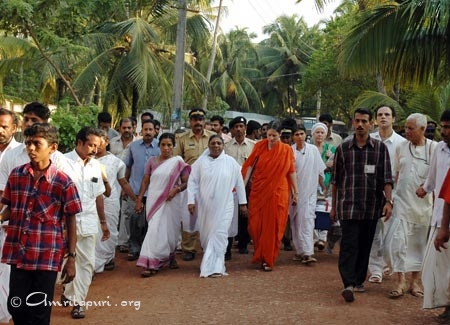 Sixteen days shy of a year ago, Beach Road was full of broken things—broken houses, broken boats, broken people. It was a place where even the idea of hope had yet to take root. In contrast, today the road was marked, not with tragedy or joy, but, markedly, with normalcy: 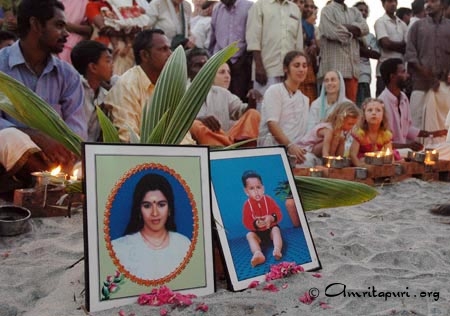 And, of course, the other major difference was that when Amma made the walk to the Azhikkal cremation grounds today, she passed by the hundreds of new houses—more than 1,000 built by the Ashram so far—that now line the road or are partially visible from behind groves of coconut trees.

Unlike a year ago, when Amma began the two and half-kilometer walk today, the road was lined with 10,000 people—a mix of residents of Alappad Panchayat, ashramites and Amma’s devotees from around the world—all holding small clay oil lamps in their hands. Smriti deepam–lamps of remembrance.

Then, as Amma passed by, all followed her, chanting Om lokah samastah sukhino bhavantu. [“May all the beings in all the worlds be happy.”]

When Amma reached the cremation grounds, she blessed with flowers a newly installed statue of a woman’s head and open hands. Made of black sand, the woman symbolizes the land praying to the sea to maintain its boundaries.

It was here that two days after the tsunami 42 bodies had been burned: mothers, fathers, dozens of children. Today, their photographs, draped with garlands, rested near the individual pyre sites. In their midst, Amma planted a small peepal tree and then led all those who’d accompanied her in circumambulating the cremation grounds. Amma then sat down on the sands of the cremation grounds and asked everyone to chant Om lokaha samastah sukhino bhavantu. The sound of all the 10,000 people chanting the mantra filled the air for the next five minutes. The only other sound was that of a few women, who had lost members of their family, breaking down.

Addressing the villagers and devotees, Amma compared life to music that can be beautiful and harmonious if lived correctly, or full of chaos and destruction if lived carelessly. She encouraged everyone to spread the light of kindness, saying that its flame never diminishes with sharing but rather intensifies.

Amma also spoke of how death is an intrinsic part of life. “All of us must face it, today or tomorrow,” Amma said. “The important thing is not how we die, but how we live. … Just because our loved ones have died doesn’t mean that we should grieve forever. Our scriptures refer to death as a step into a new life. It’s like the period that comes at the end of the sentence. It’s not only the departed souls’ near and dear ones who have prayed for their well-being; many, many children from all over the whole world have prayed too. Those prayers will never be wasted. Children, you should gain strength thinking of that. Pray to God for these departed souls to attain a superior life.” 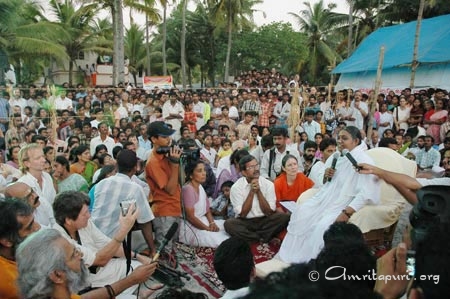 In conclusion, Amma said that certainly the world had not seen its last natural disaster, but that such obstacles in life could be overcome—not through technology but through courage, unity and strength of mind. “Seeing how you children are rising up to the occasion and facing these obstacles with courage and unity, Amma is filled with tremendous hope. If we are able to retain this mental strength and unity, we are paving the way to a bright future.”