The Ashram has finished the construction of 25 homes for tsunami-affected families in Kanyakumari, the second-most devastated area in India. The houses will be inaugurated and the residents will move in around 9 September. 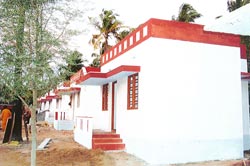 The homes are in Parapattru, a village near Mandakkadu, in the Kalkulam Taluk. The 360-square-foot houses comprise one bedroom, a living room, a kitchen, a bathroom, a veranda, and a staircase leading to the roof, where shelter can be taken in case of future flooding.

The villagers who will soon be calling the new houses home hail from an area three kilometres away. But as their previous houses—which were all destroyed by the massive waves—were directly on the beach, the government has relocated them to Parappattru, which is a half a kilometre inland. At least three people from the 25 families were killed during the tsunami. 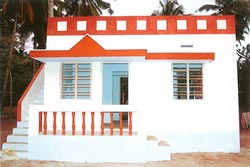 Construction on the homes began on 6 July, and the Ashram was able to finish in two month’s time—despite the monsoon. “We worked in rain or shine,” said one of the brahmacharis who worked on the construction. The Ashram has also constructed a main road for the houses, dug a bore-well and installed water tanks. The Ashram’s were the first tsunami-relief homes to be completed in Kanyakumari.

In all, the Ashram is building 100 houses in the Kanyakumari District. With the first phase of 25 homes now finished, it will begin the second 25, in Kolachal, imminently.