Ask your average college student what he or she intends to do on their vacation and most likely the response is going to involve some combination of the words “beach,” “dance” and “partying.” But about 100 students from Japan decided to get respite from their studies in another way: travelling to India to unload cement blocks and dig foundations for Amma’s tsunami-relief free-housing project. 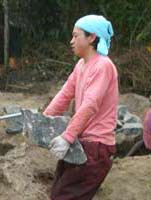 The students are part of IVUSA (International Volunteer University Student Association), which has established a relationship with Amma’s Ashram, in that almost every year since 1998 some of its members have come to participate in the Amrita Kuteeram free-housing programme—helping in places from Kerala to Gujarat. (news)

With the tsunami laying waste to thousands of homes throughout South India, this year the students set up camp in Kerala’s Ernakulam District, focusing on the village of Edavanakkad, where the Ashram is building 50 homes.

“They worked so hard,” says Vivek, an ashramite from Japan who has helped coordinate the IVUSA students for several years now. “They have fun, but they find the fun in working. They are so enthusiastic. They would start work around 8:00 in the morning and then go on to sundown. After that, we would sing bhajans. One time Swami Poornamritananda came and played his flute. It was like a flute-meditation for them.” 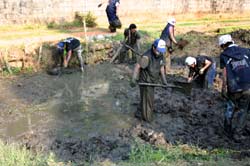 “Their attitude is very in tune with how Amma teaches us to be in our work, as far as willingness to transcend their bodily comforts,” says Gautam, an ashramite from the U.S. who was also involved in coordinating the project. “One of the plots was marked right on top of this muddy bog. I told them that we had to clear it out, and they just jumped right in and spent most of three days shovelling out all the muck. In the end they looked like mud people.”

Other jobs the students participated in included the unloading of some 30 truckloads of cement blocks, digging foundations for 18 homes and general land-clearing duties.

Although the students have paid what many young people would consider “the ultimate sacrifice”—paying to fly to another country to work, for free, on their vacation—the IVUSA students feel that they have received more than they have given.

“When I come here, I see that even the eyes of poor people are shining so brightly,” says Hayato Eto, a young man studying in Tokyo who has come three times now to participate in the Ashram’s project. “I keep asking myself why that is. I believe it is because they are rich in heart. I also learned a lot about adjusting. Construction in Japan is very different; everything is done with machines. Here we are carrying all the bricks by hand. You really learn to adjust.”

Every day the students were shuttled from their lodgings to the construction site. As the last kilometre of road was too narrow for the buses, they would have to get out and walk, and each day more and more of the villagers would come out to greet them as they passed by. “It was really beautiful,” says Gautam. “The last day it was like a procession. They were saying ‘Om Namah Shivaya,’ to everyone and everyone was saying it back—even the Muslim families. It was such an example of Amma’s teaching of how love is the universal language.”

Before the students returned to Japan, they made a short trip down to Amritapuri to have Amma’s darshan. Most people meet Amma and then become inspired by Her example to start serving the world. For these students it was the other way around.

“Darshan was so warm,” says Akina Tomimatsu, a 20-year-old girl from Tokyo. “It was a kind of love I’ve never experienced before. All the people I met here were so warm-hearted. When I go back to Japan, that is what I want to try to take with me—to treat everyone with kindness and love.”