Every morning after breakfast you see him—with his book-bag slung around his shoulder, pedalling off the Ashram grounds on his bicycle, he could easily be taken for a student. But instead of textbooks, his bag carries collections of bhajans, and he is not heading off to school but to various tsunami-relief camps where he plays, sings and talks with the children. 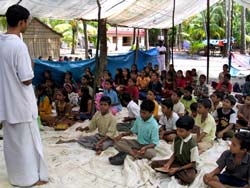 “A few weeks after the tsunami, Amma asked me to start going out to the villages,” says Brahmachari Manoj. “Amma said, ‘The children are in shock. They still have terror in their minds. They saw the water rush in, and they still are having fear. Bring some happiness into their lives. Be with them, play with them, talk with them.’ She also told me to teach them some bhajans, to help bring some samskara [cultural values] into their lives.”

And for the past two months that’s what he has been doing—12 hours a day, seven days a week. In all, Manoj regularly visits nine camps and is intimately involved in the lives of 400 children. And even when he’s not at the camps, he frequently has a crew of three or four young boys at his side. He jokes with them and asks them thought-provoking questions, even as he eats his breakfast.

“I visit the Ashram’s camp in Srayikkad almost every day,” he says. “The other camps—which are either run by the government or by the villagers themselves—I go to on a rotation, visiting each of them two or three times a week. I teach them bhajans, how to meditate and talk to them in general about spiritual matters. I focus mainly on how they should respect their parents. In India, we say matru devo bhava pitru devo bhava acharya devo bhava, atithi devo bhava, which means we should regard our mother, father, teachers and guests as God. So I focus on the first aspect. When they meditate, I ask them to worship their parents by mentally washing their feet. I also tell them stories from the Puranas, like the one about the race between Ganesha and Muruga*.”

For the past week or so, Manoj has been regularly bringing the children to Amritapuri to sing bhajans for Amma while She gives darshan. They sit right in front of her in groups of as many as 30, spending up to two hours belting out traditional namavalis and other songs praising Sri Krishna, Devi and Lord Ganesha.

A week later, Manoj came with some children from Srayikkad and they sang an original song—this one dedicated to Amma. When they first sang it for Amma, she all but completely stopped darshan so as to be able to look into their beaming faces as they sang:

We have an Amma, our own Amma,
That Amma’s name is Amritamayi!
Amma will give us a kiss,
Oh, how sweet that kiss is!
Amma will hug us and give us darshan,
Oh how blissful is that darshan!
Isn’t everything but everything my Amma?
Aren’t you my very own Amma?

We shall give a gift to our Amma.
Do you know what that gift is?
We shall not fight amongst ourselves, we shall not quarrel.
Are we not Amma’s children?

We shall study well and grow better.
Always we shall stay as one.
We shall tell no lies, we shall do no wrong.
Are we not Your dear children?

We shall listen to what our parents tell us.
At home we will be good children.
Amma has given us a prayer
Do you know what that prayer is?

Manoj says that now if any of the children start arguing or fighting, the other children will start singing: We shall not fight amongst ourselves, we shall not quarrel. Are we not Amma’s children?

At Amma’s request, Manoj also talks to the children about the tsunami and encourages them to draw pictures with crayons, which more often than not are of the disaster. “For a while they were having nightmares,” Manoj says. “They would dream that friends of theirs who had died were coming for them, calling out to them in the night. A few of them even started sleepwalking. But their relationship with Amma has given them a lot of strength. They really feel Amma is watching over them, protecting them. The fact that she gave them food right from the first day of the tsunami made such an impression on them. Now, even the ones who are scheduled to take food elsewhere are coming to the Ashram to have their breakfast. And they always make a rice-ball offering for Amma before they start eating.”
children drawing tsunami

In this day and age when the Indian culture is suffering at the hands of cable television, materialism and “modernity,” Amma is the resurrecting force, breathing life back into the younger generation through the enthusiastic efforts of young men and women like Br. Manoj. Samskara is not weakness but strength, a strength we can see starting to shine in the faces of village children around the Ashram.

*Ganesha and Muruga are both sons of Lord Shiva and Goddess Parvati. Once Parvati challenged them to race each other. The first one to make a round of the entire universe would be the winner. Muruga set off as fast as he could, but Ganesha took his time. Knowing that the entire universe was in truth within his father and mother, he simply walked around them once and prostrated. The story teaches about God’s greatness, in particular in the form of one’s parents.