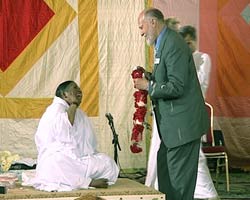 The massive rains that recently hit America’s Midwest flooded a large portion of the region’s residential, commercial and farmlands. Although the waters have subsided considerably, the threat of more rain looms in the minds of many Midwesterners. Furthermore, there is the matter of the billions of dollars in damages and crop destruction. Iowa City and its suburbs were not spared, and areas of Coralville, the town where Amma has given darshan for the past two years, remain underwater.

Upon welcoming Amma to Coralville, Mayor Jim Fausett commented that Amma’s visit was a timely one. “Amma’s coming could not be at a better time because we are at a stage where we really need some uplifting of spirits for our community,” he said. “We have seen a lot of devastation in the area and across the state. And it is at this particular time that we need to stop, take a look where we are and see how we can best go forward. And, so, Amma, again, thank you for being here again this year. … We thank you immensely.” 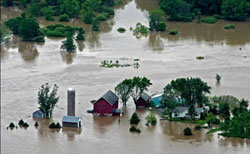 Mayor Fausett then read a proclamation, proclaiming July 2 – 3, 2008 to be “The Days of Amma the Hugging Saint” in Coralville: “Whereas, Amma is a renowned humanitarian and spiritual leader, whose sole mission is to love and serve one and all. And whereas, the greatest miracle that takes place in Amma’s presence occurs in the hearts of those who come to her. And whereas, Amma is the recipient of the prestigious Gandhi-King Award for Non-Violence. And whereas, through the example of her own life of tireless service to humanity, Amma inspires her children to walk towards the goal of self-realization by serving the poor and the needy. And whereas, Amma has inspired many humanitarian activities that have drawn the attention of the world community. Now, therefore, be it resolved, that I, Mayor Jim L. Fausett, do hereby proclaim July 2nd and 3rd 2008 to be the ‘Days of Amma the Hugging Saint’ in the city of Coralville.”