Grammy Award-winning Country and Bluegrass artist Jim Lauderdale met Amma in the summer of 2005 after being told about her by a tai-chi teacher. Reflecting back, Lauderdale says, “He said, ‘You’ve got to go to San Ramon and see Amma; you’re not going to believe her singing and her band.’”

Lauderdale says he was overwhelmed by the experience. “I’ve never met anyone like Amma—someone who has such a great impact on people’s lives for the good and for humanity. I am hard-pressed to think of someone who is doing more for mankind and the environment.”

Currently a resident of Nashville, Tennessee, Lauderdale has won two Grammys for “Best Bluegrass Album of the Year”: one for his 2007 release The Bluegrass Diaries (Yep Roc Records) and one for his collaboration with Ralph Stanley, 2002’s Lost in the Lonesome Pines (Dual Tone Records). He has also written a number of songs for Country stars such as George Strait, the Dixie Chicks, Patty Loveless, the Nitty Gritty Dirt Band, Vince Gill and Mark Chesnutt.

To the delight of devotees, during Amma’s programs in Albuquerque, Lauderdale had his first opportunity to perform for Amma, an experience he says he will never forget. “It was very moving for me,” he says. “It was hard for me to hold the tears back. I have been fortunate to perform in a lot of different place and in front of a lot of different people that I was really nervous about—various musical greats. But Amma probably stands at the top of those kinds of experiences.”

The song Lauderdale performed, “Smile from Your Heart,” was inspired by something Amma had said during a recent program. Lauderdale explained from the stage how during one of Amma’s programs a mentally challenged boy had been going around telling people to smile—sometimes going as far as to press his fingertips to their cheeks in attempts of coercing a grin to emerge. As Lauderdale was having Amma’s darshan, the boy was standing at his side. “He was saying, ‘Smile! Smile!’” Lauderdale told the audience. “And then Amma said, ‘Smile with your heart.’ And that really impacted me. Then last week that this melody came to me.” 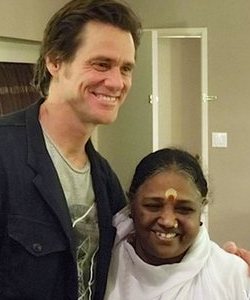 Take a little step and love will do its part.
Smile with your heart.

From the inside,
Let it glow bright.
It’s a pathway to the light.
Let it out so it can travel far.
Smile with your heart.

Lauderdale’s composition clearly imparts a spiritual message, but is Country music “spiritual”? Lauderdale says it is: “There is a history, especially in Bluegrass, of Gospel Music. In both forms, it is almost like a contradiction, because there are songs about going out and having a good time and going to a ‘honky-tonk,’ which is a bar… and then the next morning going to Church and worshipping. So, it’s kind of like the human condition—and we kind of run a gamut of behaviours and experiences. But there is a big tradition in both for Gospel Music.”

In fact Lauderdale’s musical upbringing was very much rooted in the music of the church. His father was a Presbyterian minister and his mother was the choir director. However he says that he in no way feels any conflict between Amma’s teachings and his roots. “When I first came to see Amma, I saw people from many different faiths, and so I did not feel a conflict with my Christian upbringing. I thought, ‘Here’s a saint.’”

After three years of attending Amma’s programs in America, Lauderdale remains a “fan” of her music. “I enjoy so much listening to the bhajans and hearing Amma’s voice,” he says. “She has such an earthiness and otherworldly, heavenly, side to her voice. … When I get a new Amma CD, it reminds me of the excitement I got when I was much younger and a new Beatles album would come out. You were just—Oh yeah! And you just listened to it over and over and over. That’s the kind of feeling I get.”

What does Lauderdale feel to be the secret behind Amma’s musical brilliance? “Great songs and great singers and the combination, they come from another place—no matter what style or whatever the intent or the emotion is of the song,” he says. “And I think that great singers really have to lose themselves in the song. And it is very clear that Amma does that. And what sets her apart from other singers is that she doesn’t have any ego involved in it. She’s beyond all that. There’s no agenda or commercial goal, and so it’s very refreshing to hear that.

“Sometime when I listen to the CDs and hear Amma sing, it strikes me as what God would sound like if God were making music or singing,” Lauderdale says. “For some reason, I just get that feeling.”