At 8:30 am today, Amma installed the murthi (idol) at Her newest Brahmasthanam Temple. Gongs, bells, traditional panchavadyam drums and horns accompanied the continuous chanting of the mantra “Om Sivasaktyaikya Rupinyai Namah” by the thousands of devotees present. The scene was similar to that of two days ago, when Amma performed the Kalasha Sthapana, only magnified several times over by the presence of a greater number of devotees and a greater sense of anticipation and mystery. Today, Amma was going to perform a miracle.

She was going to breathe life, breathe Divinity, into an inanimate stone. As devotees pressed in on all sides for a glimpse of Amma meditating inside the temple, the atmosphere fairly pulsed with anticipation. Even Nature seemed to be searching for the best view: as they always do at Amma’s temple consecrations, eagles circled overhead as the murthi was carried to the temple from the nearby homa kunda.

After the brahmacharis carried the four-hundred pound stone inside the temple, the doors were shut to all but Amma’s senior most disciples and a Her senior pujaris, who remained inside with Her. The rest of us could only close our eyes and imagine the miracle taking place inside: Amma embracing the murthi and, just by Her breath, installing the Divine therein.

After Amma performed the Prana Pratishta, the four doors of the temple were opened and Amma performed abhisheka (ritual bathing) to the murthi, using water from kalashas presented to Her by representatives from all four ashramas (stages of life according to the Vedas), including one sannyasi, eight brahmacharis, and more than twenty grihastas (householders) and vanaprastas*. Several Westerners also presented kalashas to Amma containing water for abhisheka.

Finally She performed arati to the murthi and prostrated before it, Her newest signpost on the path to God.

In Her satsang after the installation, Amma said, “Some may ask, ‘In this age of science, why are temples necessary?’

“Amma feels that temples are necessary to propagate culture and educate people about the importance of dharma. Temples are like mirrors which show the dirt on our faces. But just by looking into a mirror, we will not become clean. We need to put forth effort. Even a little effort from our part will attract God’s boundless grace.

“Remember that the real pratishta should take place in our hearts. Our hearts should be filled with love for God. We should be able to see God everywhere.”

Swami Amritaswarupanandaji also spoke to the assembled devotees in a satsang shortly after the consecration.

He said, “The term prana pratishta is very significant. Only a Divine Being such as Amma can do it. It is the process of giving life, Divine Light to the idol just by breathing into it. Amma’s prana, Her vital force is the vishwa shakti, the universal energy. The idol was only a stone until 8:00 this morning. But just after 9:00, once the doors were open, once Amma had imbued Her vital force into the idol, it was transformed. Amma transformed it into a center of Divine Power in one moment. This is a great miracle. But was this consecration only outside? No. By performing the prana pratishta our most beloved Amma was giving us a higher message. Through Her action, She was telling us, “Children, be a seed. Prepare yourself to be reborn as a child. Just as the unattended rock became divine by the touch of Amma’s sacred hands, children, be prepared to take a new birth. When the seed goes beneath the soil, the earth will take care of the seed. Fall into the earth, my children.

“But remember the stone had to have immense patience. There was a lot of chiselling, shaping, moulding and remoulding. And it was always patient, all the way until 9 am this morning. Likewise, we too have to be patient. Amma is tirelessly working, day in and day out, reshaping and remoulding, and we don’t know it, because we are sleeping, dreaming. Then, 9 am arrives. The stone attained liberation at 9 am and we too will attain it one day. That blissful moment will come. What is the catalyst for this transformation? It is Amma’s love. It is Amma’s love that transforms us. But just as the stone, we must have patience.”

* vanaprasta is the stage which comes after one’s children are grown, when one renounces all worldly responsibilities and retires to a solitary place or an ashram to perform spiritual practises and focus one’s life on God 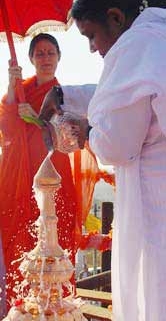 At 8:30 this morning Amma performed the Kalasha Sthapana for Her newest Brahmasthanam Temple, installing the stupika at the apex of the temple’s roof.

Gongs, bells, traditional panchavadyam drums and horns accompanied the continuous chanting of the mantra “Om Sivasaktyaikya Rupinyai Namah” (Salutations to the One who is the union of Shiva and Shakti) as Amma performed the ceremony. Throngs of devotees spilled out from the temple on all sides, palms joined and eyes upturned. Amma frequently looked to them as well, turning to all four sides with each piece of the stupika held high before installing it, and also to shower flowers and consecrated water at intervals.

The stupika consists of three brass bowls set vertically on a central spike, each smaller than the one below it. Amma filled each bowl with navdhanya (nine types of food grains) before placing the next one, and atop the third and smallest She placed a sculpted point.

Watching the proceedings, one was touched with a profound sense of the sanctity of this morning’s ceremony. What an infinitely rare and precious gift to witness a Divine Incarnation consecrating a new temple. Thousands of years ago, Lord Rama consecrated the Siva temple at Rameswaram. What was it like to be there? It was like this.

When She was finished, the stupika shined brilliantly in the sun, imbued with Amma’s shakti and sankalpa (divine resolve), a sparkling gem in the sky that will shine through the ages, pointing to Amma’s message of Unity in diversity, of Oneness inherent in the apparent duality of the world.