Amma to Visit Europe from 5th October to 18th November 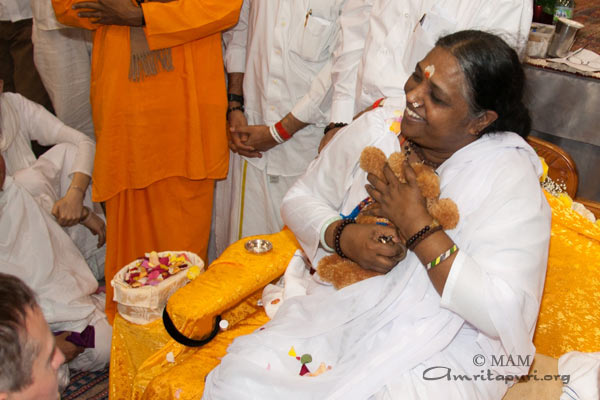 (for the program on the 9th, please check the website below)

“Onam’s message is the quintessence of all imaginable goodness. The reason for this is that, in Onam, we see the picture of all material prosperity as well as lessons of dharmic values and kindness. It’s festive atmosphere is filled with enthusiasm, celebration, games and dances. It is a product of our bond with the culture of our ancestors, as well as of our bond with Nature. It is imbued with a love so strong that it brings together family members even when they are drifting apart. Most importantly, it contains teachings that reveal the most subtle secrets of life. Moreover, it is founded upon the legend of a great emperor who was able to live these ideals. 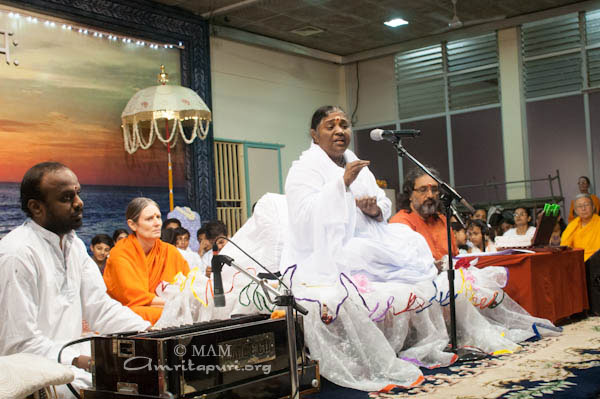 “There are two kinds of Onams. The first is the Onam born of prosperity and auspiciousness. The second is the Onam that comes from inner contentment despite lack of external affluence. That is the meaning behind the famous saying, “Be content with what you have and make each day an Onam.” This is the second Onam, the Onam of inner peace. The Mahabali that we know represents the first kind of Onam. The Mahabali who visits us every year represents the second kind of Onam.

“When Mahabali discovered that all the three worlds he had attained were insignificant before the three steps of Vamana, his ignorance dissolved and knowledge shone forth. He offered his head—representing the ego—at the feet of the Lord. Surrendering all his material possessions and attainments, Mahabali allowed himself to be filled with spiritual wealth. Mahabali represents human effort, and Vamana represents God’s grace. In losing all he had, the second Mahabali became a nobody. However he attained higher levels of fame and glory. Along with Vamana, he is also revered and worshiped on Onam.

“We see Onam as an auspicious resolve that marks the beginning of good times and the end of bad times. It also conveys the ideal of positive transformation. Just as the incomplete devotion of Mahabali transformed into complete surrender, similar should be the change within us.

“In these times, when corruption and unrighteousness prevail, Onam reminds us of our goal of returning to dharma and values” Amma reminded all those present for Onam celebrations at Amritapuri. 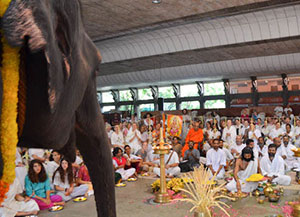 21 Aug 2012, Amritapuri
Today marked the beginning of the Ganesha Chaturthi festival here in Amritapuri.
The festivities began before sunrise with a Ganapthi Homa in the Kalari. After the homa a Ganesh statue was installed in a temporary altar just in front of the Kalari where it will reside until the end of the festival when it will be immersed in the sea.
Later in the morning one of the ashram elephant, Lakshmi, was brought into the main hall in a procession, where the Gaja Puja was performed.

The 8th European AYUDH Youth Initiative was an unique gathering where participants came from all parts of the continent and even from far off countries like Japan, Ukraine and the United States – 200 youth from 15 countries – came together at the MA Center Germany. The theme of this year was ‘The Joy of Giving.’ The youth focused on how they can use their personal talents and potential for the benefit of society and the environment. Each youth chose one workshop for the duration of the whole week. The workshops were designed to help the youth deepen their understanding of the three main topics of the initiative: ‘Give to Yourself’, ‘Give to Society’ and ‘Give to Nature.’

Integrated Amrita Meditation Technique for Youth taught the participants the simple yet effective meditation technique that can help them to be more balanced, focused and creative in their studies, work and personal life. 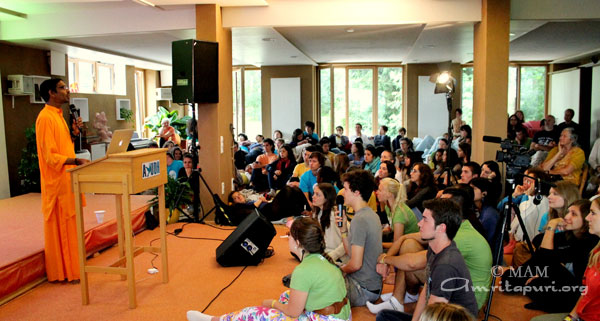 Workshps
A psychology workshop introduced the ‘Flow’ phenomena, which helps one to be more efficient, happy and relaxed in one’s work.

The singing, dancing and artwork workshops offered the chance to explore and express creative potential. All songs were written and composed by the participants themselves, ranging from Rap to Jazz to folk music. In two acting workshops the youth developed their improvisation & storytelling skills, while also learning about the discipline of acting.

Practical activities and the insight of a great workshop leader introduced the permaculture group to an alternative sustainable way to work with nature
A body work workshop introduced youth to simple and effective techniques for increased relaxation. 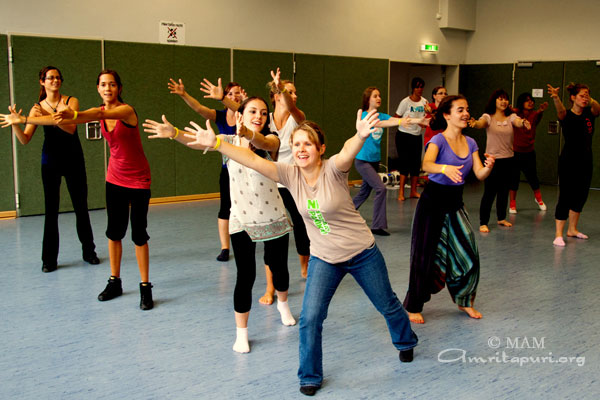 Motivational Talks
Each day a renowned speaker inspired the youth with motivational talks, using examples from their own lives. The speakers included Kirsi Ranto, pop-singer from Finland, Krisztina Peremartoni, who was the lead actress of the Hungarian National Theatre for 25 years, who talked to the participants of how singing and acting can also be used to help society and stressed on how much a refined character is important in remaining successful. Kirty Matabadal, UN Ambassador for Youth from the Netherlands shared her aspirations, tasks and responsibilities as UN ambassador with the youth.

The camp also had a very special visit from world-renowned German artist Rebecca Horn. Accompanied by Hayden Chisholm, a musician and composer from New Zealand, the evening began with the screening of the film made by her titled ‘Moon Mirror Journey’. The youngsters experienced the palpable atmosphere created by each piece, including ‘Jungle of Light’, the installation dedicated to Amma. In her speech, Rebecca Horn encouraged the youth to go back to their roots, value their cultural heritage and spread their love in society.

The talks by Br. Shubamrita on ‘Giving to Society’ and Bri. Dipamrita on ‘Giving to Nature’ highlighted on how everybody has the potential to create change in the world and in the restoring harmony between human beings and nature – in big and small ways. 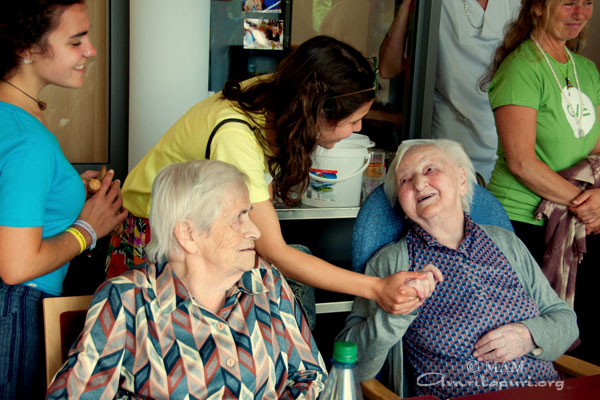 Back home, each participant had worked for raising awareness and funds for the walk, directed towards helping ‘Embracing the World’ in their educational projects for children. To support the youth in their cause and inform the public, the local bank “Volksbank Odenwald” hosted a one month video and photo exhibition about the educational initiatives of “Embracing the World”.

Along the way, the youth visited an old age home and spent a few hours with the residents there. Some young people visited room-bound elderly people and distributed some gifts hand-made by the participants. The Portuguese group played and sang for the elderly people in their rooms. Afterwards, Spanish TV comedian Antonio Jose Garcia del Valle entertained the residents and youth with a medley of popular songs and skits, bringing both tears and laughter to everyone’s face.

Dil Se De
On the penultimate day afternoon, the youngsters shared the ‘Joy of Giving’ through a multi-cultural youth street theatre performance. All topics explored during the week like benefits of meditation, protecting Mother Nature, conserving water and energy, relaxation techniques, etc, were translated into music, dance and drama. The performance culminated in a 200 strong dance troupe to this year’s theme song ‘Dil Se De’ [video]. Passers-by were impressed by the young people’s talents and sincere concern for environmental and social issues. 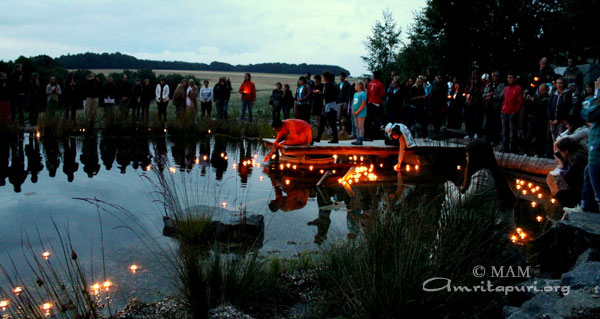 Candle Ceremony
Artist Gabriele von Lutzau, visited the M.A. Center to inaugurate a cast of the peace dove carved during the previous year. Each participant joined in the universal peace prayer ‘Om Lokah Samastah Sukhino Bhavantu’ and carried a candle to the nearby lake and gently placed it on the waters. It was a beautiful sight to see the 200 lighted candles, floating on the surface of water, with the atmosphere reverberating with the chants for world peace. The serene atmosphere created by the candle ceremony continued into a special exclusive concert with Kirsi Ranto and Antonio Jose Garcia del Valle. Other AYUDH participants shared their musical talents and an overwhelming feeling of pure joy was experienced by all.

On the final day, the Mayor of Brombachtal, Mr. Willi Kredel thanked the youth for travelling to the local region and mentioned how inspired he is by all that AYUDH does. As in previous years, the event was supported by the ‘Youth in Action’ programme of the EU and the city of Michelstadt.

Implementation
Throughout the week, the youth had drafted follow-up ‘Joy of Giving’ projects for implementation in their home countries. Each young person left for home with their hearts filled with fulfillment, happiness and enthusiasm to continue ‘Giving,’ which is such an important part of Amma’s life and teachings.