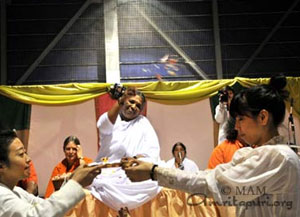 Children’s Camp 2008
17 – 18 May 2008 — Amritapuri
Last weekend saw 2,500 children from all over Kerala and beyond coming to Amritapuri for a two-day personality development camp, Amrita Sangamam. The free camp comprised of yoga and meditation classes, and motivational talks by various speakers including many of the Ashram sannyasis. The children were divided into groups by age. Amma interacted with the children, holding a lively question-and-answer session, giving darshan and singing bhajans.On the first night when Amma arrived for the evening bhajans, one boy shouted, “Amme! You are our mother, aren’t you?” Amma simply smiled down at him, nodding her head. All the children—both boys and girls—burst into applause.

The meditation taught was a new version of Amma’s Integrated Amrita Meditation Technique® (IAM Technique®) specially designed for children.As with all the children’s camps held in the past by the Ashram, the highlight was the question-and-answer session. The first question came from an 18-year-old Malayali girl studying in Tamil Nadu. She told Amma that she and other students were suffering from ragging [hazing] by older students. Nearly in tears, she explained how she had complained to the school authorities about it but that no action had been taken. She asked Amma what she should do.”Just to point it out shows you have courage,” Amma told her. “You have to point out to them (to the authorities) that this is happening. Otherwise the situation will only get worse. It could end in something like torture, even death. This ragging is a big problem. Many mothers come to Amma and tell her about it. It is not a part of Indian tradition, but it has come here. Many children are suffering because of it. Many become depressed. Being depressed, they cannot properly study. Their minds cease to function properly. In order to overcome it, they wind up on antidepressant medication.”Don’t think standing up against this is a small thing. You are saving many from a big disaster. However, you should be prepared to face the consequences and problems that may arise by standing up. Make a report. Make sure it is truthful. We should not act without thinking, but we should also not think without acting. Your friends might not support you. It’s not that they don’t have love for you, but they are afraid. You may have to face sorrow, but regardless you should speak up. You should point out the adharma [unrighteousness]. Only in this way can dharma [righteousness] be restored.” 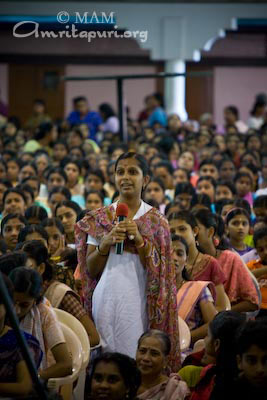 Another student told Amma that many kids in her college were regularly throwing big parties, spending lots of money on food and drinking alcohol. She told Amma that she had tried to explain to them that the money they were spending could be used to help the poor, but they were not interested to hear what she was saying. The girl wanted to know how she could make her classmates understand.”Only those who have starved will know the pain of those in hunger,” Amma said. “Only those who have carried heavy loads will know the difficulties of the laborer. These children have had no suffering in their lives. Whatever they have wanted in life has been given to them by the parents. Their parents should look into this.”Once we had a problem at the Coimbatore Campus [of Amrita Vishwa Vidyapeetham]. The children were wasting a lot of food—taking more than they could eat and then throwing away the leftovers. At the end of each meal, there would be 10 waste buckets full of wasted food. They were told many times, but they did not listen. So a fine was imposed on those who wasted food. Within one week, what was 10 buckets was reduced to one. Sometimes only through punishment awareness comes.”When we look at the world, we should remember all the suffering people. With this in mind we should reduce the amount of ice cream and chocolate we eat and the amount of clothes we buy. We can use the money we save to help the poor.”

The next question was from a boy. He said, “Amma, after being here and listening to the talks by the swamis, we really feel the inspiration to make a strong decision to change our attitude and lifestyle. But that decision will only last till we get home. Then we will fall back into our old ways. How can we develop the will power to live these ideals?””When examination time draws near, no one will spend their time playing or going to the cinema or gossiping,” Amma said. “Why? Because they have developed awareness. If your desire to change is sincere, you can awaken this awareness within.”Amma then stressed the importance of keeping good company, explaining just how much influence one’s friends have over one’s personality, attitude and actions.”We should reserve some space for others in our hearts,” Amma said. “We should also have the patience to wait for others. Then we can have heaven within and we can create heaven on earth.”Amma advised all the children initiate service projects, like building public toilets and cleaning up public areas. She said that outbreaks of Chikun Gunya and Dengue Fever could be prevented if people would engage in such service activities. “Prevention is better than cure,” Amma said.

Towards the end of the session an engineering student from Alappuzha said, “I am meeting Amma for first time this weekend. Even though Mother’s Day was on May11th, I feel that today is the real Mother’s Day.” This elicited a huge round of applause from all the kids.The girl then went on to tell Amma that many children in her school frequently receive and share various videos on their cell phones. Some of them are extremely violent, even showing graphic executions. “I don’t understand,” she said. “How can people watch such things and not even be affected by what they are seeing? People today seem so desensitized to the suffering of others. Does Amma have anything to say about this?””We don’t consider society’s problems as our problems. During India’s Freedom Struggle, everyone felt society’s problems to be their own. This brought freedom. We need to rekindle such an attitude.”Amma said, “Love for God and compassion for the world are not two separate things. How can you teach love? How can you teach compassion? It has to come naturally from within. We should pray for such people.”Amma also talked to the children about the importance of respecting their parents and Mother Nature. She also taught them some simple practices to adopt in order to cultivate awareness and reverence, including offering food to God before eating. Furthermore Amma explained to the kids that for success in any field three things are needed: kripa, karma, kaalam—grace, action and proper timing.The session ended with one child asking Amma to sing the bhajan “Mata Rani.” Amma agreed to, if they would dance to the tune. And soon the hall was filled with singing and dancing children, all having the time of their lives with Amma. 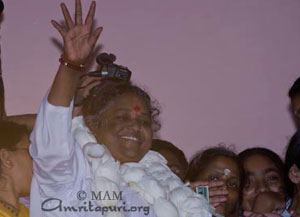 Amma visited Ernakulam for a 2 day program on  May 3 & 4, 2008 with Satsang, Bhajans, Cultural performances, awards and of course Amma’s loving embrace that we know as Darshan.

The first and second graduating batches of the Amrita College of Nursing in Cochin came to Amritapuri today. The students have all but concluded their five-year courses—the first batch will graduate on May 15, the second on October 15th. Each of the students had Amma’s darshan, with Amma handing out diplomas herself. The students also requested Amma to take a photo with them as a group, to which she agreed. 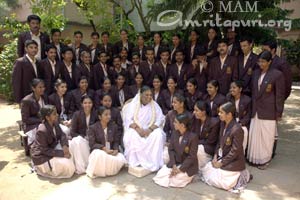 “I feel I really benefitted from all the advanced facilities available at AIMS, as it is super-specialty hospital,” said Deepu Prasad, 22, from Idukki. Deepu says his next goal will be to pursue an MSc Nursing degree at Amrita. [The course is currently in inspection stages.]

Sherin, 28, from Ernakulam, says the most valuable thing she learned at Amrita was to see the divinity in each person she is treating. “We learned to greet everyone by saying ‘Om namah shivaya.’ [I bow down to the Divinity within you.] When we see each person as divine, we will put in maximum effort to serve him.” Sherin is planning to go for Masters in Nursing.

Krishna Das, 23, from Edappal, Malapuram District, said that he was happy to have been able to participate in several social-service activities during his education. “In 2005, we spent one month in the tsunami-hit areas, distributing medicine, making dressings, helping the doctors, transporting patients. It was a great opportunity.” His immediate plans are to prepare for his ILs so that he can become eligible to work abroad. His goal is to get a job in Australia.

Rashmi, 23, from Cochin, has been accepted as a Clinical Instructor. She feels one of the chief advantages of studying at Amrita was that AIMS is a social-service oriented hospital. “We were able to learn more about spirituality. We were very lucky to have Amma’s soothing presence during our studies. We learned the difference between sympathy and empathy. Sympathy is merely feeling sorry for someone. Empathy is putting our self in their place and truly indentifying with their pain.”